There can be no doubt that there are periods in church history when one can not be very pleased with what took place. Here is one such example. The “Church” at the time was nearly 100% Roman Catholic and the Pope did his best to eliminate any competition even to the point of breaking God’s law (Exodus 20:13) Thou Shall Not Kill.

Somehow in today’s world we have gotten this messed up idea that we are to forget the past, eliminate all signs of it (those that are disagreeable) from our culture, this is unbiblical. Yes there are Bible verses that tell us not to look back, they are ALL in context telling us not to take our eyes off the Prize of God (Christ) and putting them back on worldly things (think Lot’s wife). On the other hand there are many more that remind us to REMEMBER what we learned in and from the past 1 Corinthians 11:2, Isaiah 46:9, Revelation 2:5, Psalm 143:5. 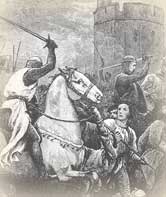 The knights and bishops in control of the crusade could easily have stopped the bloodshed. Instead, they did nothing to halt the slaughter. A horde of howling camp-followers raged through the city, killing everyone they found. They entered the churches, where the town’s folk huddled in terror, and butchered them in cold blood, although some of the victims undoubtedly hoped for divine intervention as they held up relics and crucifixes.

The pope’s representative seemed untroubled by the massacre when he wrote to his master, Innocent III, that “neither age, nor sex, nor status had been spared.” In fact, a popular account said that Arnald-Amaury, the pope’s legate, was asked at the height of the butchery how the killers should distinguish Catholic from heretic. He was said to have replied.”Kill them all; God will recognize his own.” Although this cannot be verified, it indicates how contemporaries felt about the event.

Beziers is a city in Southern France, near the Mediterranean, across from Italy. We associate crusades with the Middle East. So how come a crusade was taking place there?

The region of southern and western France was infected with movements which opposed Catholicism. Especially strong in that area were the Cathars, also known as Albigenses (because they were strongest around Albi). According to Catholic sources, the Cathars had corrupted Christian teachings with many false doctrines. (Virtually all Cathar literature was destroyed so we know little about what they really taught.) However, Cathar elders lived holy lives, and in an age in which the church was rich, top-heavy, and corrupt, the simple, pure Cathars attracted many followers.

The pope offered wicked men pardon for their sins if they would undertake a crusade against the heretics. The prospect of loot excited many to join the army. The crusaders swept down upon Beziers, arriving July 21, 1209. The city was well-provisioned for a fight. Catholic and heretic alike joined to defend it against the crusaders. That Beziers did not give the invaders a real fight was owing to a mistake. On this day, July 22, 1209, a group of defenders rode out with white pennants shooting arrows at the crusaders. They killed one. Furious, a bunch of rag-tag camp followers, without proper weapons, rushed the walls. Beziers had not expected an attack so soon; the walls were not properly manned. Defenders fled. Within three hours, the crusaders had taken a city that they had thought they would have to beseige for several months.

The knights and bishops did nothing to stop the killing. But when the poor soldiers began to loot, the knights stepped in. The plunder was for them. They found it easy enough to stop their followers then. But some of the looters, angry at being cheated out of their share of the spoils, set buildings on fire. Soon much of the town was ablaze, and within a few hours the crusaders had to pull out, the heat was so intense. Many valuables perished in the blaze.

The fall of Beziers doomed the Cathars. Many Catholics made terms with the crusaders, handing over local Cathars. In other places, Cathars abandoned their cities and burned their castles so the invaders could not use them. But Carcassone, a Cathar stronghold, held out for several months and managed to obtain decent terms of surrender.

Way of Truth »
« When the Father of Lies enters the pulpit with a Bible under his arm!