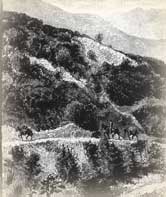 On this day July 2, 1950, the evangelical pastor Martinez Quintana stepped outside a house to face an angry mob along with local policemen who were battering the door of a house in which he had taken refuge. “Down with the heretics!” screamed the mob. They had already burnt a number of evangelicals’ homes. Inside, Christians prayed for Quintana’s life and their own.

Martinez tried to reason with the murderous crowd. The evangelicals were not meddling in politics or supporting guerrillas, he assured the angry people. “We are earnest Christians serving the Lord and carrying out his will.” The mob wasn’t buying it. A policeman stepped forward and shot Martinez point-blank through the head. The mob then rushed down to dynamite the evangelical church.

Thus another saint died in Colombia. Martinez had bravely accepted the pastorate at Campo Hermoso although he knew it was a target of violence. He was no stranger to threats. A priest once offered a price for his head and promised that whoever killed him was guaranteed a place in heaven.

Colombia was locked in a terrible Civil War, La Violencia, in which hundreds of thousands of people died. This war raged from 1948 to 1957, but its roots went far back in Colombia’s history. Traditionalists, largely Catholic, desired a centralized government; progressives, largely evangelical, desired a federal system. Before the war ended, the homes of all evangelicals in the Campo Hermoso were burnt to the ground. Their plantations were wrecked; their cattle were butchered or stolen. To survive, the evangelicals hid in caves and inaccessible mountains where 1,800 starved to death or died of disease. When the war was over, they had to rebuild from scratch.

According to Diana Dewar’s account in All for Christ, the Campo church was founded when a few men saw an ad for evangelical books on the back of a piece of wrapping paper. They ordered one each of the books, taught themselves the faith and lived it. Their changed lives attracted others to Christ and evangelicalism spread through the mountains.

Wishing to be baptized, the new converts wrote to a gospel society for help. The Christian Missionary Alliance sent a missionary. Later, Martinez, pastoring several miles away, relocated to become their minister.

In the years immediately following the violence, a compromise government was worked out in which liberals and conservatives held equal power. The nation’s presidency was rotated. More recently, liberals have controlled the government. Guerrilla warfare and cocaine production have often marred the peace of the beautiful land.

Children Through Christ »
« A Warning to the Church