Have you ever heard someone say what difference can I make, I am only one person? As the following article details one person can do plenty when they see a need and put God at the forefront. – Mike 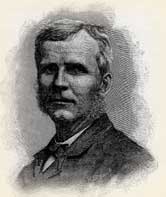 What was the son of a Hawaiian missionary doing in Virginia anyhow? Samuel Chapman Armstrong was there to study. But he soon found himself learning more out of the classroom than in it, for the Civil War took him from his books to become Lieutenant-Colonel of the Ninth United States Colored Troops Regiment in the Union army. That is where his life’s work began.

It was impossible for him to labor beside his dark-skinned companions without stirrings of conscience. Their need for education was immense. If Christ‘s call to do for our brothers what we would have done for ourselves meant anything, he must do something!

After the war, he served on the government’s Freedman’s Bureau. It seemed too little. An entire race needed practical training. Armstrong made it his business to see they were helped. He proposed the creation of a vocational school. Obtaining financial backing from the American Mission Society, he founded the Hampton Normal and Agricultural Institute, in Washington DC. On this day, April 1, 1868, the institute opened to begin its task of training freed slaves “hand, head, and heart” (that is, vocation, academics, and faith.)

In Hampton’s highly structured program, the morning was devoted to religious exercises and academic classes, the afternoon to vocational trades and work. Armstrong insisted that students learn by doing. The skills Hampton taught included blacksmithing, carpentry, cooking, dressmaking, farming, laundering, sewing, and shoemaking. The students themselves helped build and maintain their campus.

As befitted a school sponsored by a Christian mission, faith experiences were part of the Hampton routine. Church services and devotions were mandatory. Chapel time each morning consisted of Bible reading and hymn singing.

Ten years after Hampton’s founding, it branched out and took Native Americans in. Armstrong was the only educator who would agree to train Indian prisoners of war. All Armstrong’s efforts were spurred on by a simple creed. “Simply to Thy cross I cling is enough for me,” he said.

Hampton Institute lives as testimony to Armstrong’s faith. Its ideas served as a model for Booker T. Washington when he undertook the educational program at Tuskegee. Like Armstrong, Washington put his primary emphasis on vocational training.

My last words shall be »
« A Snapshot of the Global Church: