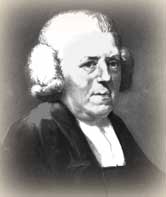 To be at sea in a storm on an ocean liner can be thrilling. To face a storm in a sailing vessel that is not seaworthy can be terrifying. The boat in which John Newton sailed was in disrepair and its sails and rigging worn. A hard man who had often mocked God, John was considered impious even by his godless mates.

One night he was wakened by a violent wave crashing against the vessel. Water filled his cabin. Hurrying above, he found that timbers had been ripped away. All were in terrible danger as the ship plunged through a furious storm. Men pumped desperately. Clothes and bedding were stuffed into holes and boards nailed over them. John joined those who were manning the pumps.

Too exhausted to pump any longer, he was lashed to the wheel to try and steer the ship. The storm raged on and on. It was bitterly cold, the more so since the men had few clothes left. In this desperate moment John turned his eyes back over his life. Raised to the age of seven by a Christian mother, he had sought the Lord with fasts and prayers, but failing to find God he had become embittered. Despite this, the Lord preserved him through many dangers. Once he was even made a servant to slaves on the West coast of Africa.

In his heart he believed Christianity to be true. This brought him no consolation. “I concluded my sins were too great to be forgiven. I waited with fear and impatience to receive my doom.” But soon he heard the glad news that the ship was freed of water. “I began to pray…to think of that Jesus that I had so often derided; I recollected his death: a death for sins not his own, but, as I remembered, for the sake of those who should put their trust in him.” On this day, March 21, 1747 (new calendar) a day he ever after observed, John realized he needed a Savior to intercede for him with God.

He snatched a free moment to open the Bible and begin to read. Though the storm raged on for days, John spent every free moment in the Scripture and praying for guidance. Hungry, cold, exhausted, the men kept the ship afloat. Only one died of exhaustion but the Captain muttered that John ought to be thrown overboard like Jonah; his wickedness was the cause of all their misery, he claimed. Finally they reached Ireland.

By then John was convinced the Lord had reached down and delivered his soul. The story of the Prodigal Son seemed to exactly fit his case. He never turned back from that day of salvation, although, not realizing slavery was a sin, he worked six years as a slaver. He showed kindness to the slaves he transported, held worship services for his men and wrote hymns for them. Later he saw that slavery was wrong and became an abolitionist and a minister. Reflecting on his hard life, he wrote one of the world’s most loved hymns: “Amazing grace, how sweet the sound that saved a wretch like me.”

Pray for the Persecuted Church »
« Daily Devotional – Mortification of Sin