Fear nothing that you are about to suffer. Be aware that the devil is about to throw some of you into prison, that you may be tested [in your faith], and for ten days you will have tribulation. Be faithful to the point of death [if you must die for your faith], and I will give you the crown[consisting] of life. 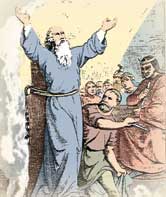 Towards the end of the first century, or perhaps even at the beginning of the second century A.D., the apostle John died after years of ministry to the churches of Asia Minor, the region now occupied by modern Turkey. John was the last of the original apostles, but the truths of Christianity did not die with him. His spiritual children continued to stand firm in the faith in Christ as the Son of God that John had heard, seen, and even touched (as John tells us in 1 John 1:1-2).

One of John’s spiritual sons, Polycarp, was born about 69 A.D. He lived in Smyrna and learned much by listening to John. Polycarp became a leader of the church at Smyrna, and in many ways his character reflected that of his teacher. He had the same noble Christian spirit, full of gentleness, yet inflexible in speaking out against error.

The Church at Smyrna, of which Polycarp was the bishop, was one of those addressed by Christ in the Revelation. Christ told them that persecution was about to come upon them and promised a crown of life to those who were faithful unto death. The promise was undoubtedly repeated by Polycarp to many in his flock to encourage them as the Romans hauled them off to face wild beasts or death by fire.

When the authorities searched for Polycarp, friends persuaded him to leave the city and hide in a farm-house. There he spent his time in prayer. A letter written by the Church of Smyrna told that: “while praying he fell into a trance three days before his capture; and he saw his pillow burning with fire. And he turned and said to those that were with him, ‘it must be that I shall be burned alive’

“When his pursuers were on his track he went to another farm-house. Finding him gone they put two slave boys to the torture, and one of them betrayed his place of concealment. Herod, head of the police, sent a body of men to arrest him on Friday evening. Escape was still possible, but the old man refused to flee, saying, “the will of God be done”. He came down to meet his pursuers, conversed affably with them, and ordered food to be set before them. While they were eating he prayed, ‘remembering all, high and low, who at any time had come in his way, and the Catholic Church throughout the world.’ Then he was led away.”

The proconsul (an important magistrate) ordered Polycarp to renounce Christ and give obedience to Caesar as Lord. Polycarp answered: “Eighty and six years have I served Christ, nor has He ever done me any harm. How, then, could I blaspheme my King who saved me? You threaten the fire that burns for an hour and then is quenched; but you know not of the fire of the judgment to come, and the fire of eternal punishment. Bring what you will.”

Polycarp, the last one of those personally taught by the apostles, was burned at the stake on this day, February 23, 155. As the Lord required, Polycarp was faithful unto death; he did so in expectation that he would receive a crown of life from Christ.