CONTEXT: Chapter 1 includes a brief introduction (Philippians 1:1–2) followed by three key sections. First, Paul gives thanks and prayer on behalf of the Philippian Christians (Philippians 1:3–11). Second, he focuses on the expansion of the gospel (Philippians 1:12–18). Third, he emphasizes that, for the believer, to live is Christ and to die is gain (Philippians 1:19–30). Along the way, Paul explains that how the Christian life is a reflection of what they set their mind on. He stresses the importance of rejoicing and joy and connects the faith to concepts such as glory.

Our text today would seem to be a verse that all peoples could get behind, but we would of course be wrong in our postmodern world. Think of it who would object to someone loving more, by using knowledge and discernment.

Discernment according to Webster’s 1828 dictionary is The act of discerning; also, the power or faculty of the mind, by which it distinguishes one thing from another, as truth from falsehood, virtue from vice; acuteness of judgment; the power of perceiving differences of things or ideas, and their relations and tendencies. The errors of youth often proceed from the want of discernment.

Everyone applies this to their daily lives. We make judgments on what to buy, what is safe, who our kids should or should not hang out with, etc. These JUDGEMENTS are part of our normal routine and no one complains, until…

… once you start using your “smarts” and applying discernment, especially in a Biblical manner, then you are a Bigot, Racist, or some newfangled term I can’t keep up with. If you speak out against Abortion, any LGBTQ issue or anything the Bible says we are to stand up for you are labeled a troublemaker and accused of being judgemental.

Or maybe we are just dedicated Christians and believers in the Constitution, no matter the label.

The fools are easy to spot unless of course you live among them. Oh they look like everyone else and they even spout out the same rhetoric as seemingly the majority of media, but they have a hidden secret. The preach tolerance for all but have no tolerance in them for anyone that opposes their narrow worldview.

They think we are stupid for our beliefs but quickly invoke God’s name regularly (cursing and such). They are quick to call us (Christians) all sorts of names like bigot, hater, racist, homophobe, and so many more.  Yet they are also the same ones who are first to demand the killing of innocent babies in the womb, (or more recently after birth) assault anyone who differs from their self righteous opinions, yell and scream obscenities at Christians and call them out for doing go works just because we believe differently than them.

The bible has much to say about fools, today’s verse is one of the better known from the book of Psalms (Wisdom books) 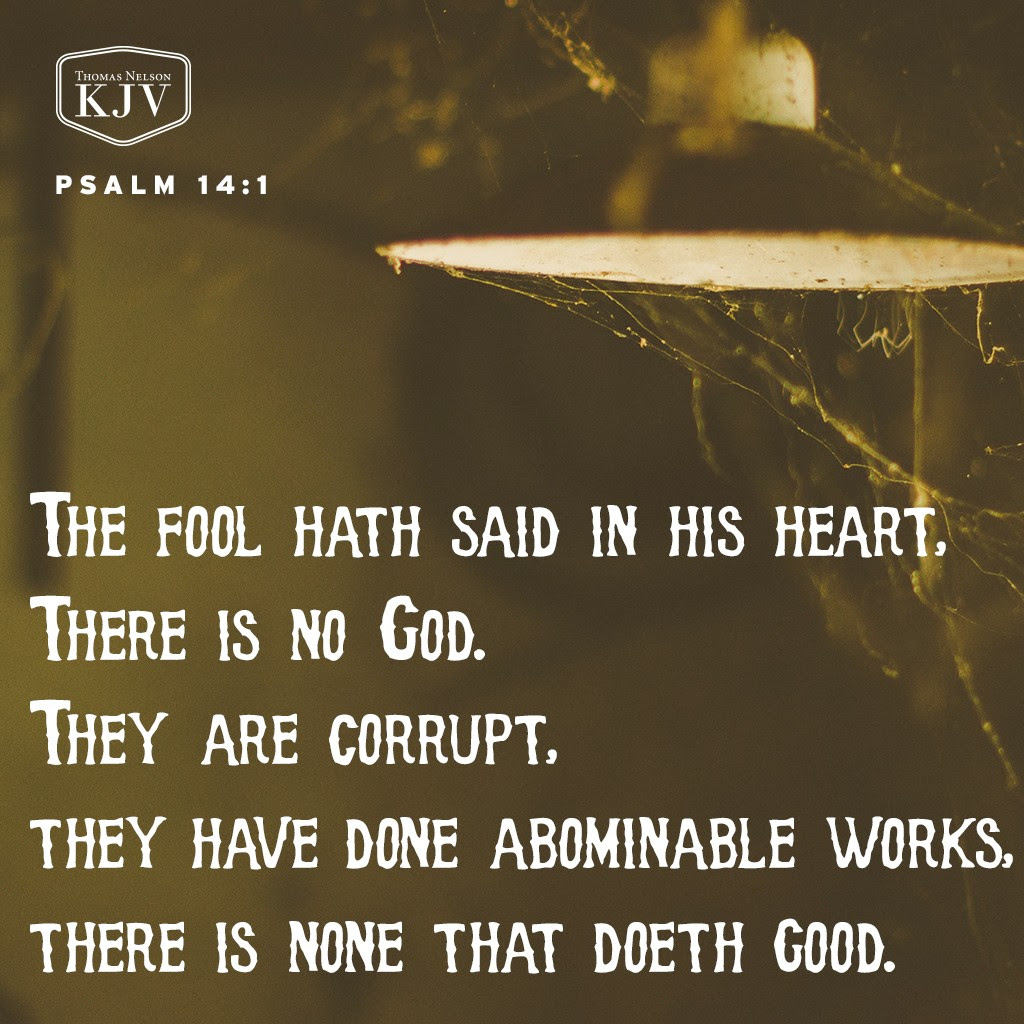 Man will always be and play the fool apart from God. Without the saving blood of Christ to change a man from the old fool to the new creation he is incapable any righteous act on his own accord.

How do we as Christians respond to a fool? The answer of course lies in the Bible this time in the book of Proverbs 26:4-5

Answer not a fool according to his folly, lest thou also be like unto him.

5 Answer a fool according to his folly, lest he be wise in his own conceit.

I have to admit the first time I read this I was so confused. For those old enough to remember the “Three Stooges” I thought the bible had me doing the Curly Shuffle.

So breaking of my study helps and some language dissection later I realized what was actually being said here was quite sensible:

v.4  Never argue with anyone who is close-minded and arrogant. Do not even pretend to agree or acknowledge their folly unless you wish to be culpable like them.

v.5  Go ahead and respond to those who have foolish concepts but are not close-minded or above reason. Otherwise he will think you agree with him.

Most times it is better to walk away and just ignore (do not verbally engage) the person Proverbs 29:20 better we not get involved and start an argument looking the fool ourselves or being drawn in and accused of something worse Proverbs 26:17.  That is not to say be rude and intentionally snub someone but use grace, love and wisdom to not engage in their foolish argument.