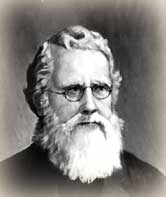 My feelings on stepping ashore I cannot attempt to describe. My heart felt as though it had not room and must burst its bonds, while tears of gratitude and thankfulness fell from my eyes.” So wrote Hudson Taylor of the moment of his landing at Shanghai, China on this day, March 1, 1854 at 5 p.m.

For years his heart had burned with desire to carry the gospel to China. He had exerted every ounce of his energy for this moment. Through weary struggles, through bouts of depression, through storm and danger of shipwreck, through heart-wrenching separation from his family, in isolation from other Englishmen, in hours of intense prayer, he had persevered to step upon this shore.

He did not know a soul, nor where to turn, although he had on him a letter to a missionary already established on Chinese soil. But Hudson Taylor had learned much about trusting the Lord, and this night his trust was not misplaced. As if guided, he found his way through the unfamiliar oriental streets to a mission compound where he was kindly received.

Nothing worked out according to his expectations. His first six months in China were dreary and lonely. His income was tiny and he could do little. Civil war began the week he arrived and rival gangs slaughtered people before his horrified eyes. Unable to rent a house as he had hoped, he had to impose on his kindly hosts. He flung himself into language learning, to the neglect even of his devotions. His mission board embarrassed him with its ignorance of China.

Hudson Taylor overcame these difficulties and many more. He learned the language and made up his mind to adopt native dress. It was his hope to establish a thoroughly native church. The Chinese, he felt, had little to do with Christianity because they hated foreign ways.

His methods proved successful. In time he broke gracefully away from his English board and founded the China Inland Mission, based wholly on faith. He did not tell others of his financial needs, trusting that the Lord would provide whatever was needed. He prayed specifically for his needs and for more missionaries. One year he prayed for 70 missionaries. The Lord sent 76. Another year he asked for 100 and got 102. The Lord also provided their passage money. At his death the China Inland Mission had 205 missionaries.

Hudson Taylor married Maria Dyer, who died tragically young. Nearing death, she kissed Hudson again and again, for each of their eight children. She had been a true support to him.

Hudson was left to carry on without her. Chinese Christianity grew slowly. For many years the number of Protestants hung at barely a million. Under savage persecutions, Christianity flourished. Today the Chinese church is thought by some analysts to be the fastest growing in the world. Chinese Christians owe their first contact with the Gospel to the evangelism of men such as Hudson Taylor. When he stepped in faith onto Shanghai’s soil, he became one of the greatest missionaries the world has known.