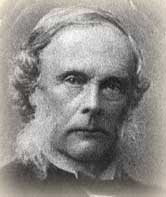 Joseph Lister belongs on a short list of the world’s greatest doctors. His research taught him that killing germs would save lives and allow surgeons to operate inside bodies. Fierce resistance met his ideas and he had to defend them over the opposition of England’s top physicians. But when he died on this day, February 10, 1912, he was recognized around the world as one of the great benefactors of mankind.

Modern surgery is possible thanks to the persistence and faith of Quaker-born Joseph Lister.

Before he turned sixteen, Joseph had made many dissections under the microscope and announced he would become a surgeon. His surprised mother did not discourage him, although no one else in the family had ever entered that profession. Friends and family wondered if he wasn’t too kind-hearted and shy to handle the terrible screams he would hear and the pain and pus he would witness.

Joseph became a doctor partly because he was a Quaker. Quakers were forbidden to enter Cambridge or Oxford universities where law and other professions were taught. “Godless” London University was the only great institution in England that opened its doors to a Quaker, so Joseph studied there. While still a student there, he authored a pamphlet on the “Use of the Microscope in Medicine” using a microscope given him by his father. (His father, J. J. Lister, a wine-distiller, was co-inventor of the compound microscope.)

With the discovery of chloroform, surgical pain was reduced. Even so, more than half of all patients died from gangrene after they were operated on. Dirty conditions allowed germs to infect them.

Joseph Lister became a good surgeon through careful study and hard work. He pioneered the use of “catgut” ligatures (actually the intestines of cows or sheep). But his greatest contribution was to show that infections were caused by germs. A friend had shown him an article by Louis Pasteur.

Lister hunted for something that would kill germs while not injuring body tissues. He discovered that carbolic acid (phenol) kills germs. Its use greatly decreased death rates after surgery. However, the wet carbolic acid made a doctor’s hand’s raw during surgery and bandages soaked in it irritated patients’ skin, making them miserable, which is why hospitals today try to create aseptic conditions instead– that is, to isolate the patient from germs.

Because the woman he married was not a Quaker, Lister had to leave the Society. He faithfully attended the Scottish Episcopal Church thereafter for the rest of his life. A man of true Christian character, no one ever heard him raise his voice in anger. If ever he did anything to give offense, he was quick to apologize. He said of himself, “I am a believer in the fundamental doctrines of Christianity.” He told a graduating class: “It is our proud office to tend the fleshly tabernacle of the immortal spirit, and our path, if rightly followed, will be guided by unfettered truth and love unfeigned. In pursuit of this noble and holy calling I wish you all God-speed.”