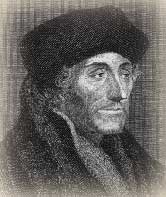 Erasmus loaded the cannon that Luther fired. The greatest scholar of his day, Erasmus rammed two shots into the barrel of the Reformation.

The first shot was a satire titled, The Praise of Folly, which poked fun at the errors of Christian Europe. For example, Erasmus reminded his readers that Peter said to the Lord, “We have left everything for you.” But Folly boasts that, thanks to her influence, “there is scarcely any kind of people who live more at their ease” than the successors of the apostles.

The second shot was a Greek New Testament. For centuries, Jerome’s Latin translation, the Vulgate, was the Bible of the Church. However, Jerome’s translation had deficiencies. Erasmus reconstructed the original New Testament as best he could from Greek texts and printed it. In a parallel column he provided a new Latin translation. What is more–and this could have cost him his life–he added over a thousand notes that pointed out common errors in interpreting the Bible. He attacked Rome’s refusal to let priests marry although some lived openly with mistresses; and he denied that the popes have all the rights that they claim. The scholar also challenged practices not taught in scripture: prayers to the saints, indulgences, and relic-worship.

After years of work, Erasmus was ready to release his book. He wondered how he could avoid trouble. One way was to link the New Testament with some great man’s name. And so, on this day, February 1, 1516, Erasmus dedicated his New Testament to Pope Leo X. He had gotten the Pope’s permission the year before. In a soothing letter written to Leo a few months later, he assured him that he meant no harm. “We do not intend to tear up the old and commonly accepted edition [the Vulgate], but amend it where it is corrupt, and make it clear where it is obscure.”

Just in case the authorities should be angry, Erasmus pointed out that the ideas were not new with him. He quoted the greatest church fathers in support of his corrections. It would be a lot harder for intolerant factions to argue with dead heroes than with him!

Like Jerome’s translation, Erasmus’ New Testament was not completely accurate either. He did not have access to the best manuscripts. Nonetheless, it was enough of an improvement over the old that Martin Luther, William Tyndale, and other translators based their vernacular versions on it. Furthermore, they picked up Erasmus’s calls for reform.

The result was that the Reformers broke away from the Roman Catholic church. For a time Erasmus and Luther remained friends. But Luther’s words were so violent that Erasmus could not accept them. When Erasmus did not agree with Luther, the Reformer called him all sorts of names, such as “secret atheist.”

Erasmus, who thought that the Christian life meant living in the peace of Christ, was hurt. He was in grave danger from both camps. Protestants said he held onto too much that was Catholic; the Catholics threatened him because they claimed he was wrecking the church. Erasmus had to flee from Catholic Louvain to escape being burned to death at the stake.

Erasmus had such a reputation for wit that people were willing to wait quietly for him to answer a question. Frederick the Wise once asked the scholar his opinion of Luther. Erasmus thought while the king waited silently. Finally he answered, “Two ‘crimes’ Luther has committed: he has attacked the tiara of the pope and the bellies of the monks.” Frederick laughed.

We do not often hear of Erasmus. Yet Anabaptists, Zwinglians, and Lutherans claimed to be his true children. His Bible and his wit helped bring about the Reformation.