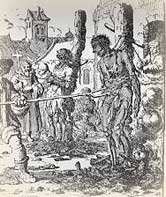 Because of a baby, the church changed on this day, January 21, 1525. No one realized it at first.

The Protestant reformation in Europe had furthered the recovery of faithful Bible interpretation. When reformers gained control of governments, they replaced the Roman church with reformed churches. For the most part, all people—including newborn babies—were expected to belong to the newly reformed churches, just as they had belonged to the old. Newborn babies were baptized into the reformed church and became members simply by being born in their community, much as a person becomes a citizen of the United States by being born there.

Reformation came to Zurich, too, under Ulrich Zwingli’s Bible-centered teaching. The Zurich City Council and most Christians supported his reforms. However, when an eager group of Zwingli supporters looked into the Bible, they found a wide difference between the primitive churches of the first century and the state churches of the sixteenth.

They became convinced that the church wasn’t intended to include everyone. Rather, it should include only those people who really know and follow Christ. “How could a baby join a church,” they asked, “When it knows nothing but to cry and eat?” These Christians believed that the only true baptism comes when one is old enough to understand its meaning. Among them were Georg Blaurock, Conrad Grebel, and Felix Manz.

When Grebel’s wife had a baby, the couple decided not to baptize their child although Zurich authorities said they must. Other families imitated the Grebels. The Zurich City Council handled this civil disobedience the same way they would have handled an appeal for trash pick up or a new bridge: on January 17, 1525 they held a public debate on the issue. The people’s representatives listened to both sides and voted for baby baptism. The Council ordered that the “radicals” must no longer meet together, or teach their opinions to others and that all families must baptize their children within eight days or leave Zurich.

With the deadline running out, the Anabaptists must do something. Trudging through the wind and snow on that chilly night, January 21, 1525, they gathered at Felix Manz’ house to decide their course of action. Their meeting was “illegal,” of course, but one thing the little group was sure of–governments have no right to dictate religious beliefs. It was a radical idea then. But once they saw it and grasped it, there was no turning back.

They talked and worried and prayed. When they rose from their knees, Georg Blaurock had made up his mind. He asked Conrad Grebel to baptize him in the apostolic manner–upon confession of faith. Grebel did, and then Blaurock baptized all of the others who were willing. By that action, the Anabaptist movement was born. “Anabaptist” means “rebaptizer.” It was a name given to them in mockery by their enemies.

The Anabaptists obeyed the Zurich council and moved out of town. They started their own church, completely free of state ties, and preached to others. To Zurich this seemed like rebellion and they jailed the offenders. When released, the men preached again.

In the course of time, Manz, Blaurock and many other Anabaptist leaders were executed. The bold stand of those men changed the entire church, but only after oceans of blood had been poured out, trying to control other people’s faith.

Mennonites, Hutterites, and Amish are the direct offspring of the Anabaptist movement. Baptists and many other groups baptize a person only if he or she is old enough to understand the meaning of the act and make a confession of Christ. But all of us have benefited by the Grebels’ decision not to baptize their baby. Thanks to their stand, most Protestant churches now act on the principle of separation of church and state, although around the world governments still try to impose their stamp on the church.