No Rest for a Weary Clara Swain 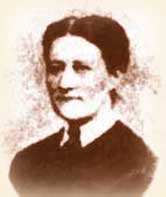 Travel today can be fatiguing. When Clara Swain left the United States in 1869, to become the world’s first qualified woman medical missionary, it was far more arduous than now. She wrote:

“The latter part of our voyage was very rough and I was too sick to write, and I had five sick ones to look after besides myself…I cannot bear to think of the sea, it treated me so badly.”

Circumstances did not brighten when she landed at Bombay, India. Her luggage was a week late. When she attempted to leave Bombay in a horse-drawn conveyance known as a dak garis, the horses lay down and refused to go, despite all coaxing. She slept in the dak garis, well aware that the fires winking in the distance were to keep tigers away from villages. Thanks to delays, she arrived at her next stop, Jubalpore, too late to catch the train to Cawnpore. She had to wait another day. At Cawnpore, she was still one hundred and eighty miles from her destination, Bareilly.

With no knowledge of the local language, she was hard pressed to obtain food. In the end, she found it necessary to fast most of that day and night as she traveled in another dak garis. She arrived in Bareilly at five in the morning, on this date January 20, 1870.

After so exhausting a journey, she might have been forgiven if she sought a day of rest before beginning medical work, especially since her luggage, with its precious cargo of medicines, would not arrive for another month. However, rest was not to be her lot.

“My medical work really began the day of my arrival. When I came out of my room in the morning I found a company of native Christian women and girls eagerly awaiting the appearance of the “Doctor Miss Sahiba,” and with the aid of a good missionary sister I was able to understand their words of welcome and find out what I could do to help them. As I had no medicines with me, I procured a few simple remedies for their ailments from Mrs. Thomas…”

By the end of the year she had treated 1,300 patients and trained seventeen medical students. Single-handed, she lectured on anatomy, physiology, materia medica, and diseases of women and children. By 1874, she had built the Women’s Hospital and Medical School, the first in all of Asia.

Its forty two acres was acquired miraculously from the Nawab of Rampore. This zealous Muslim had sworn he would never allow a Christian missionary in his city. After deep prayer, Clara and another missionary approached him about the land. He greeted her royally, feasted her, and exclaimed, “Take it, take it; I give it to you with much pleasure for that purpose.”

Clara’s work was essential, because male doctors were not allowed to attend women. Religious customs secluded high-caste females to Zenanas. Medical care was usually provided by ignorant barber girls. Clara used her skills as a doctor to gain an entrance for the good news that Christ had come to free India’s women of sin and raise their status.

When Clara’s health began to falter in the hot climate, she accepted an offer to become palace doctor to the Rajah of Rajputana and his Rani. She attempted to teach the love of Christ to women so spiritually ignorant that they even worshiped her sewing machine! Clara recounted these experiences in colorful letters home, published in 1909 under the title, A Glimpse of India. Her missionary adventures included a brush with death in a flood and a close call while riding an elephant in another of her arduous journeys.