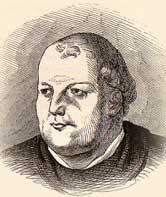 If it had not been for Dr. Staupitz, I should have sunk in hell,” said Martin Luther.

Johann von Staupitz was the vicar of the Augustinian order at the University of Wittenberg when Luther responded to an invitation by Frederick the Wise by coming there to teach. At the time Luther was struggling with the need to confess completely everything he had ever done wrong. He wore Johann von Staupitz out, trying to remember every sin that his mind would try to cover up. On at least one occasion, he confessed for six hours straight.

Johann tried to explain God’s grace to Luther. Surrender to the love of God, he counseled. Luther should lose himself in God, he said. He was making religion too difficult. All he needed to do was love God.

But Luther was tormented by fears and doubts. “I was myself more than once driven to the very abyss of despair so that I wished I had never been created. Love God? I hated him!”

“I don’t understand it!” replied the longsuffering Johann when Luther reported this latest line of reasoning to him. He reminded Luther that Christ died to remit our sins. However, Luther was so afraid of Christ, the judge, that he could not turn to him for relief.

In a daring move, Johann resigned as Bible teacher and appointed Luther in his place. Now Luther had to study the Bible for himself and counsel others from it. Luther had not dealt much with the Bible; the theology courses he attended emphasized writings other than the scriptures. Lecturing on Romans and Galatians, Luther arrived at his world-changing insights on faith.

In the end, Luther broke with the Roman confessional system which had been of no help to him. He renounced penances and indulgences. The teachings of the Bible became his guides in place of church fathers, confessors, or popes.

Johann never left the Roman Church. However, he remained friendly toward Luther. He was present when Cajetan ordered Luther to recant. Shortly afterward, he released Luther from his Augustinian vows. Still, he wrote words of encouragement to Luther. “The world hates the truth. By such hate Christ was crucified, and what there is in store for you today if not the cross I do not know.”

At one point, Johann relayed Luther’s position to Rome for the reformer. Pressure was put on Johann to shut Luther up. Johann resigned rather than attempt it. Rome ordered him to recant. He hesitated. He had never taught the things he was told to abjure (renounce). In the end, he accepted the pope as his judge.

In his last letter to Luther, Johann told him he still loved him dearly. But he implored him to remember the weak. “Do not denounce points of indifference which can be held in sincerity,” he advised, adding, “We owe much to you, Martin.”

Johann died at Salzburg on this day, December 28, 1524. He had written books on predestination, faith and love. Pope Paul IV placed these on the Index of Prohibited Books in 1559.