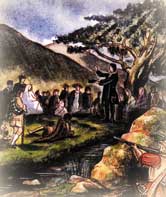 When Hugh McKail dragged himself up the scaffold for his hanging, on this day, December 22, 1666 he did so joyfully. The twenty-six-year-old Scotsman was eager to enter eternal life with God and he told the crowd so.

“Now I leave off to speak any more with created beings and begin my communion with God, which shall never be broken off. Farewell, father and mother, friends and relations! Farewell, the world and all delights! Farewell meat and drink! Farewell, sun, moon and stars! Welcome, God and Father! Welcome, sweet Lord Jesus, the mediator of the New Covenant! Welcome, blessed Spirit of grace, God of all consolation! Welcome glory! Welcome eternal life! Welcome death!”

His final speech made such an impression that some think it was the reason that soldiers soon after that began playing their drums loudly whenever a Covenanter tried to say a few last words from the scaffold.

Hugh died for his faith. Ordained at twenty as a Presbyterian preacher, he held his pulpit only one year. King Charles II was determined to force the Scots into an Episcopal form of worship. As a consequence, he threw many staunch Presbyterians out of their pulpits. Hosts of Scots had signed a covenant vowing not to allow destruction of the Presbyterian church or to allow the government to control the Scottish church. They were called Covenanters. Hugh was one of the Covenanters.

Hugh angered the authorities by preaching a sermon against their persecution in which he said that the Scriptures give abundant “evidence that the people of God have been persecuted, sometimes by Pharaoh upon the throne, sometimes by a Haman in the state, and sometimes by a Judas in the church.”

For these bold words he had to flee to the European continent for three years. Eventually he returned home and was living quietly in Galloway. What brought about his downfall was joining a band of Covenanters when a rebellion broke out. This was owing to government outrages. For instance, the king’s men tortured people who did not have the money to pay taxes. Hugh’s decision to join the troop was a mistake; he was weak from illness and could not keep up with them.

Captured, he refused to tell who the others were or to incriminate them by saying that they had plotted their uprising in advance. To get information out of him, he was tortured with the boot, a painful device in which a metal wedge was hammered against the leg bone. He passed out from pain when the bone split, but did not give the desired information.

Following a further hearing, he was sentenced to death. After the sentence was carried out, the crowds learned that Charles had ordered a reprieve.** Hugh should not have been killed, but sold to the American plantations. This created great anger, because it was widely believed that Archbishop Burnet of Glasgow kept the king’s letter a secret so that the Covenanters would die.

**According to Taylor, James. The Scottish Covenanters. London: Cassell, Petter, Galpin & Co., nd.;  the records of the King’s Privy Council show that such a letter was sent.