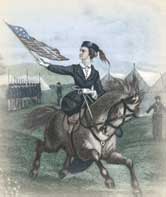 On this day, December 8, 1897, Sister Anthony died quietly in her sleep in Cincinnati, Ohio. Although her death was peaceful, her life was lived amid scenes of deep distress. She chose to have it that way.

Mary Ellen O’Connell, who became Sister Anthony, “The Angel of the Battlefield,” was born in Limerick, Ireland in 1814. While she was still a young girl, her Catholic family emigrated to Massachusetts. Mary dreamed of becoming a nun the way many girls dream of a husband or a career. She had recently turned twenty-one when she took her vows as a Sister of Charity. That is when she adopted the name Sister Anthony.

Two years later, she was assigned to open an orphanage in Cincinnati, Ohio. She brought the institute into being within six months. Her task completed, she asked permission to remain in Cincinnati. The city had many other needs. Although old-people’s homes existed, they were miserable places. “Some of these institutions are called hospitals, but they are more like dungeons,” she wrote. After describing dark rooms and insufficient food, she suggested the remedy. “I believe that our Sisters of Charity would be performing a holy act by providing a better place for invalids of the city.”

The result was St. John’s Hotel for Invalids. Cheerful and well-lit, it provided a pleasant alternative to similar homes. And the patients were well-fed. However, their medical care was dependent upon emergency calls to doctors. Sister Anthony saw female nurses as a better solution. At that time, however, training for women nurses was almost nonexistent.

The War Between the States changed that. In 1861, when Southern ships fired on Fort Sumter at Charleston, South Carolina, the United States was plunged into war. As casualties mounted, the need for nurses became painfully evident. Sister Anthony left comfortable, secure Cincinnati to tend wounded soldiers.

In a letter, Sister Anthony described her own efforts and those of a co-worker, “Were I to enumerate all the good done, conversions made, souls saved, columns would not suffice. Often have I gazed at Sister De Sales as she bent over the cots of those poor boys, ministering to their every want, in the stillness of the night. Here is one to whom she gives a cool drink, here another whose amputated and aching limbs need attention, there an old man dying, into whose ears she whispers the request to repeat those beautiful words: ‘Lord, have mercy on my soul!’ ”

Acceptance did not come easily. Even after the sisters had proven themselves to be superb helpers, the doctors hesitated to allow them at the front. After the Battle of Shiloh, Sister Anthony fought for that privilege–and won. That is how she became one of those known as an “Angel of the Battlefield.” She also won her campaign for nurse’s training. Yes, Sister Anthony had fought hard for right causes and so she died easily.