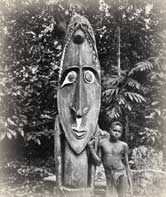 In accord with the Redeemer’s command and assured of His presence, we are going forth to those lands where Satan has established his dark domain. I know that suffering awaits me. But to bear the Redeemer’s yoke is an honor to one who has felt the Redeemer’s love.”

Those words were from John Geddie’s parting message to the Canadians who were sending him to the mission field. With his wife, Charlotte, and his children, he sailed from Halifax, Nova Scotia, on this day, November 30, 1846, bound for Polynesia. “Wee John,” as he was called, was the first Presbyterian sent from Canada to do missionary work. Born in Scotland, he was raised in Nova Scotia and became a Presbyterian minister. He showed such zeal for soul-winning as a pastor on beautiful Prince Edward Island that he became an obvious candidate for mission work.

Eleven months after sailing, the little party landed in Samoa. After exploring the Pacific islands, they settled on Aneiteum, a small island at the tip of the New Hebrides chain near Australia. Conditions on the island were appalling, but perhaps not so bad as on some other islands. Traders exploited and abused the inhabitants and brought them deadly diseases. The natives lived in squalor and ignorance, as they had for centuries. They ate one another and killed a man’s wives when he died.

John buckled down to the task of learning the new language so that he could explain Christianity in words the people understood. “Those are privileged indeed, whom God permits to prepare the key, which shall unlock the hidden treasures of divine truth, which makes the soul rich to all eternity,” he wrote as he prepared literacy material from which the natives could learn to read the Bible when it was done. That is, if they cared to.

It did not seem they were interested. For three years he labored and taught. But, although his school grew to 120 pupils, wicked practices continued. When he traveled the forests, the natives hurled stones, clubs and spears at him. Several times he was hurt. He grew discouraged.

Without warning things changed in 1851. Several chiefs decided to convert to Christianity. Suddenly the churches were overflowing. Little Aneiteum sent missionaries to other islands! John had always insisted that every convert was responsible to tell others. The people of one island, hearing of the transformation the gospel made, even sent over a pig with which to buy a Christian teacher!

Sixteen years after coming to Aneiteum, John and his family returned to Canada for a “rest.” They toured the nation telling of their work. While home, John translated the Psalms into the Aneiteum language. Demand for the Scripture was so great that the islanders chipped in the equivalent of several hundred dollars to help print the book. This was a great sacrifice for them, because their incomes were so small.