Elizabeth Sang in Answer to a Bird 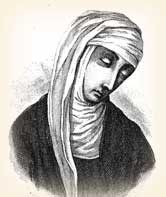 Elizabeth of Hungary was only 24 when she died on this day, November 17, 1231. She packed so much life and suffering into those 24 years that her story became the subject of art and legend.

Elizabeth von Thuringia was born in 1207, in a royal castle. Her mother Gertrude was a deep Christian who imparted faith to her daughter. Elizabeth’s father, Andrew II, fought valiantly in the crusades, but was not a good king. His nobles forced him to sign Hungary’s Magna Carta, the “Golden Bull.”

Before she was two, Elizabeth was betrothed. At four she was sent to live with her prospective in-laws to learn their customs. Within the thick gray walls and iron gates of Wartburg, she grew to womanhood.

Gertrude was assassinated when Elizabeth was seven. The grieving girl knelt in the Wartburg chapel, praying for the souls of the murderers. Shortly after this, Elizabeth’s fiancee died. Her status in Thuringia was cloudy. However, another son, Ludwig, said he would like to marry her.

When Elizabeth was just fourteen, her dream day came. In spite of family attempts to send her away as too holy, the beautiful girl married Ludwig. The two bound themselves to rule justly and to open their home in hospitality. Ludwig took as his motto “Piety, Chastity, Justice.” Elizabeth adored him.

Elizabeth brought great wealth to the marriage. After her wedding, she had the choice of five castles to live in and so she was called “Elizabeth of many castles.” But until she became pregnant, Elizabeth preferred to ride across the war-torn land with Ludwig.

A son was born to her. She carried him in her arms and walked barefoot to St. Katherine’s chapel where she recited psalm 127: “Children are a heritage of the Lord, and the fruit of the womb is his reward.”

St. Francis of Assisi had recently been called men to repent, cast aside the chains of wealth, and show kindness to the poor. Franciscans arrived in Thuringia in 1221. Elizabeth longed to share her blessings with the poor. Placing herself under the instruction of Brother Rodeger, she opened eastern Europe’s first orphanage and tended lepers with her own hands. This outraged her hoity-toity in-laws. They tried to drive a wedge between Ludwig and her but failed. After he died, they seized her inheritance and expelled out.

She became a Franciscan tertiary, the first in the German empire and, after Ludwig’s friends exerted their influence to restore her dowry to her, she opened a hospital and worked herself to death tending the sick. Overworked and undernourished, she succumbed to disease herself. As she lay dying, she was heard singing in response to a bird upon the wall. At cockcrow of her last day, she said, “It is now the time when [Christ] rose from the grave and broke the doors of hell, and He will release me.”