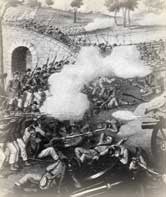 Wounded men lay in the blazing sun in an open field at Gettysburg, pleading for relief. John C. Chamberlain offered assistance. “I soon found myself driving stakes with a rock and twisting every spare corner of their bedding over them. My success started others and soon I had the comfort of seeing the whole hospital in the shade.” He went on to comment, “After all, my dear sir, our labors at such times are of such a nature that we can give but a faint idea of them on paper. There are a thousand little nameless acts which the world cannot know, nor we ourselves recall, that are nonetheless important in their issues.”

John was a representative of the United States Christian Commission. During the American Civil War, hundreds of thousands of Northern soldiers were wounded and more than a quarter of a million killed. Who would minister to the spiritual needs of the soldiers who were facing death? On this day, November l6, l86l, YMCA volunteers established the United States Christian Commission. George H. Stuart was appointed as its permanent chairman.

Stuart, a banker, had spent most of his life supporting evangelical missions. Under Stuart’s leadership, the Christian Commission raised $3 million in cash and solicited valuable donations of supplies. The organization was entirely volunteer. Men, women, and even children, raised money, sewed clothing and created kits for soldiers of both north and south. The organization recruited over 5,000 field volunteers to assist chaplains in ministering to the spiritual needs of the soldiers. Notable personalities at work in the commission were evangelist D. L. Moody and the merchant John Manama.

The Christian Commission distributed thousands of Christian tracts, Bibles, and pamphlets to the soldiers, and provided them with additional reading material by operating portable libraries. Its volunteers also distributed medical supplies to field hospitals, assisted surgeons on the battlefields, wrote letters home for the sick and wounded, and taught and witnessed about Christ.

As an example of their witness, the records of the Christian Commission tell how General O. Howard, while visiting the division hospital after the Battle of Resaca, found a fair-faced boy who could not live until morning. Kneeling down on his blanket, the General asked if he wanted anything done for him. “Yes”, said the boy, “I want somebody to tell me how to find my Savior.” The General shared Scriptures with him, prayed, and saw a peaceful smile break out on the boy’s face before he died.

Needless to say, the Commission’s work was a vital religious force in the Union army. It had the sincere support of most commanding officers who recognized its importance not only for morale but for the eternal welfare of the young men under their charge.