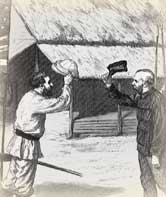 For years, no one had heard from the Scottish missionary explorer, David Livingstone. In l866, he had disappeared into the East African interior, searching for the source of the River Nile. Livingstone’s reports of his earlier explorations in Africa had fascinated multitudes of readers at home. Once asked why he decided to be a missionary, Livingstone replied: “I was compelled by the love of Christ.”

His Missionary Travels and Researches in South Africa, published in 1857, told of treks totaling more than 20,000 miles back and forth across the African continent. His explorations provided valuable information about the people and geography of Africa’s interior. However, when he didn’t know, he guessed; and his dreams were often bigger than the facts; this cost a number of missionary their lives because they relied on his accounts. James Stewart (founder of Lovedale mission) was so disgusted with Livingstone’s personal life and misinformation that he threw one of his books into an African river.

All the same, Livingstone awakened the world to the horror of the Arab slave trade, which he called a “monster of iniquity brooding over Africa.” By publicizing the evil of slavery, Livingstone worked effectively to see it abolished. For every 20,000 slaves captured and exported, he estimated 100,000 Africans were killed, wounded, or died of disease on the slave trails. He wrote: “The many skeletons we have seen along the paths of the wilderness attest the awful sacrifice of human life that must be attributed to this trade in hell.”

In 1871, concerned that for five years no one had heard from Livingstone and eager to obtain a “scoop,” the New York Herald sent journalist Henry Stanley to find him. Landing in Zanzibar, Stanley traced Livingstone’s steps into the interior. To do so, he had to find his way (sometimes fighting) through hostile territory and overcome attacks of malaria, the jaws of crocodiles, mutiny and desertion.

After months of misery, learning that Livingstone was close, Stanley and his porters donned their best clothes. At last, on this day, November 10, 1871, they saw an old white man by the shores of Lake Tanganyika. Knowing this could be only one person, Stanley greeted him with his now world-famous comment: “Dr. Livingstone, I presume.”

The foods Henry brought with him saved Livingstone’s life, for he was desperately ill and able to eat only African porridge. “You have brought me new life,” said the missionary over and over. Unable to persuade Livingstone to leave Africa, Stanley joined him in exploring part of Lake Tanganyika and then returned to England. Unlike James Stewart, Stanley was impressed with Livingstone’s Christianity, and wrote: “It is not of the theoretical kind, but it is a constant, earnest, sincere practice…and it is always at work.”