Today in Church (and US) History

Illegal to Deny the Bible 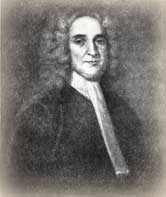 Suppose the U.S. Congress passed a law making it illegal to deny the Bible as the Word of God? Today, the Supreme Court would quickly rule that such a law is unconstitutional because it violates religious freedom guaranteed by the First Amendment of the American Constitution. But did you know that on this day, November 4, l646, the little Massachusetts Bay Colony passed just such a law?

For the Puritans, who founded the colony, and for John Cotton, one of their most prominent preacher-leaders, it made sense for them to have a theocratic (God-directed) government in which the laws ruling society were also the laws of God as found in the Bible.

Yet the Puritans did not strictly combine church and state. They recognized that church and state had different purposes–one was for the salvation of souls; the other was for the preservation of society through justice. Both, however, had their source in God, and both should look to the Bible as the source for standards, direction, and guidance.

Most Puritans used the Geneva Bible translation. Its preface summarized what the Bible meant by calling it the “light to our path, the key to the kingdom of heaven, our comfort in affliction, our shield and sword against Satan, the source of all wisdom, the food for our souls, and the glass in which we see God’s face.”

For the Puritans, it was unthinkable that the teachings of the Bible were meant to deal only with a narrow religious sphere. They believed the Scriptures provided the rule and guidance for all of life–government, economics, education, church, family, and morals. And so, on this day, November 4, 1646 the Massachusetts Puritans passed a law prohibiting their people from denying that the Bible is the Word of God. The penalty for persistence in this error was death. The same act also set a fine of five shillings for failing to attend church on Sunday.

I am guessing this fact is not being taught at all in Massachusetts schools.

Daily Devotional – Unworthy Servants »
« I suppose they like to choose their own wives!