Beza, Last of the Great Reformers 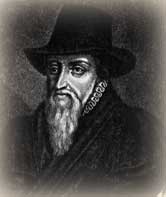 Each day, two of Geneva’s ministers came to check on Theodore Beza. The old reformer was dearly loved and they were concerned for his failing health. On this day, Sunday, October 13, 1605, the sick man felt well enough to dress. Theodore asked his visitors, “Is the city in full safety and quiet?” He was assured that all was well. Moments later, he lost all strength and collapsed to the floor. Friends gathered and prayed at his bedside as he passed peacefully away within a few minutes. The last of the great reformers was dead. His had been a life of much sorrow, hard work and grueling adventure.

Theodore Beza was born in Burgundy in 1519, the son of a county bailiff. His father had marked out one course for him, but it seemed God had another. At nine years of age he was sent to study with a famous Greek scholar Melchior Wolmar. Wolmar’s sympathy with the Lutherans rubbed off on his pupil. What fruit this would bear was not yet apparent.

Beza’s father wanted him to become a lawyer and Beza did the preliminary studies. However, he preferred literary studies and convinced his father to allow him to switch fields. He became honored as a Latin poet and wit.

Through family connections, he received church benefices to live on. Meanwhile, like many clergymen of the day, he contracted a secret marriage. His wife was Claudine Denosse. Then Beza fell dangerously ill. As he lay in bed, he realized that he was a hypocrite, taking money from the Roman Church while secretly married and at heart a Protestant. As soon as he recovered sufficiently to do so, he fled from France with his wife, leaving behind fame and fortune.

False starts aren’t all bad. His wit remained with him throughout his life. Appealing to the king of Navarre, he once said, “Sire, it is in truth the lot of the Church of God, in whose name I am speaking, to endure blows, and not to strike them. But also may it please you to remember that it is an anvil that has worn out many hammers.”

Claudine was one of the deepest joys of his life. Their marriage lasted until her death forty years later. Theodore himself became a leading Huguenot theologian, and eventually Calvin’s successor as leader of the Swiss Reformation.

During his long life he risked dangerous journeys again and again into Catholic France, even traveling by night to escape detection. On these trips he was in danger from Judas friends. Yet he argued the Protestant case before great theologians and political leaders. On occasion he accompanied Huguenot armies and preached for them. Using the diplomatic skills honed during his upbringing, he visited the Protestant courts of Europe to win support for the suffering French Protestants.

The notice of his death read, “What the haven is to those that sail, that is the removal into another life to those whose death is precious in the eyes of the Lord.” All were “invited, in the name of the pastors and professors, today at noon, to pay this last honor due to so great a man and one that has died in so pious a manner and attend his funeral…”