Kay Coles James President of The Heritage Foundation – James is a leader in government, academia and the conservative movement. 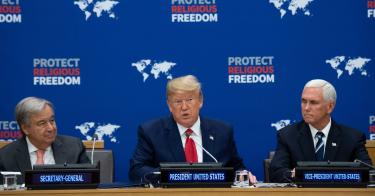 I was recently at the United Nations General Assembly when President Donald Trump became the first sitting U.S. president in history to convene a meeting at the U.N. solely devoted to protecting religious liberty. When critics declared it was simply a political move to score points with his base, they failed to understand how important religious liberty is to the peace, prosperity and freedom of the religious and nonreligious alike.

In fact, the evidence that society benefits as a whole when religious freedom is protected is so impactful that on Tuesday, The Heritage Foundation’s Institute for Constitutional Government hosted a discussion with key officials from the departments of Justice, Education, and Health and Human Services on the administration’s efforts to protect religious liberty and the effects they are having.

In addition to the obvious spiritual, moral and emotional benefits religion provides to the faithful, nonreligious people realize tremendous advantages when religious liberty is respected. Long before government did it, churches and religious organizations were building schools, hospitals, research centers, homeless shelters and food kitchens for the benefit of everyone, not just believers. They were also providing disaster relief and sending missionaries to aid impoverished people in the farthest reaches of the globe.

We see even more benefits for both believers and non-believers when we study nations that allow a significant amount of religious freedom and see large numbers of people practicing their faith. These nations generally experience lower rates of violence and crime. Moreover, governments that respect religious liberty also display greater peace and stability, which is attractive for business investment and jobs.

Religious freedom also goes hand-in-hand with other fundamental human rights. One only has to look at countries like Iran, China, and Venezuela to see that a lack of respect for religious liberty correlates directly with high levels of oppression and the lack of respect for other rights.

Even in nations where citizens have a great degree of religious freedom, we are seeing that freedom challenged and diminished. When tolerance for religious beliefs wanes, intolerance for other beliefs isn’t far behind. When it becomes acceptable to discriminate against or persecute people for their religious beliefs, it’s a short slide down the slippery slope to justify doing the same thing to both the religious and nonreligious based on their political beliefs, their beliefs on how they raise and educate their children, or some other belief system that doesn’t comport with the government’s.

According to data from the Pew Research Center, over 80 percent of the world’s population lives in countries where religious liberty is threatened, restricted or banned. Thousands are displaced or killed annually because of their religious faith. In response, President Trump in his U.N. speech called on foreign leaders to protect the free exercise of religion, to end the persecution of people practicing their faith, and to repeal laws restricting freedom of religion and belief. He also reaffirmed his administration’s commitment to promoting religious freedom here at home.

One part of the president’s announcement that didn’t get much notice was his creation of a first-of-its-kind coalition of U.S. businesses tasked with encouraging the private sector to protect people of all faiths in the workplace and integrate support for religious liberty into their diversity strategies. When religious freedom is respected in the workplace, morale and even productivity can improve significantly.

However, the benefits aren’t just within companies. They can encompass whole economies. According to a 2014 study by Georgetown and Brigham Young University researchers, religious freedom is one of three factors significantly associated with overall economic growth. The study found a positive relationship between religious freedom and 10 out of 12 indicators of global competitiveness.

Demonstrating more than just correlation between religious freedom and economics, the study found that both government restrictions on religion and societal hostility to religion harmed economic growth, driving away business investment as well as home-grown entrepreneurs who decided to take their talents elsewhere. Businesses seek peace and stability when locating facilities or seeking new markets in which to sell their products and services. When religious freedoms aren’t respected, violence and conflict can result.

This piece originally appeared in The Washington Times

>>>Religious Freedom: What’s at Stake If We Lose It