Missions Work is not New 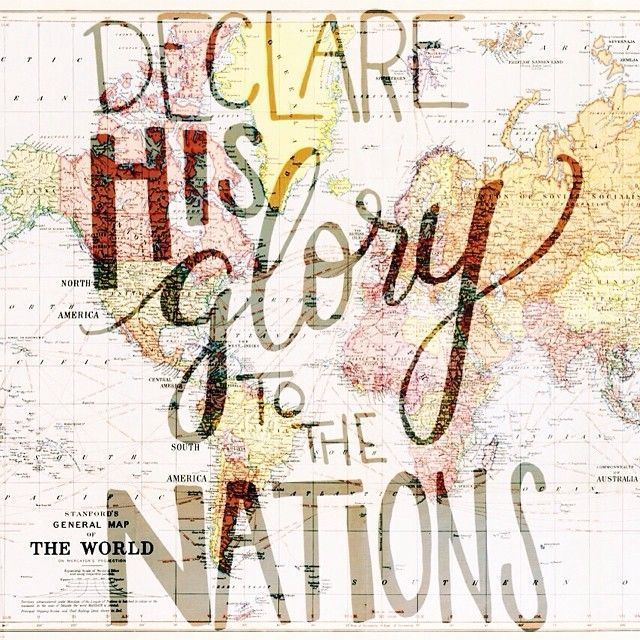 Declare His glory among the nations,
His wonders among all peoples. (NKJV)

I just returned from the annual Reformed Baptist Network Conference in Coconut Creek Florida. It was a great time of business, edification, fellowship, Glorification and renewal. As a adviser to the missions committee I was very pleased to have the theme of this years conference “Motives for Missionary Labors”. You can find the three main evening speaker’s sermons here and I also highly recommend the final speakers (David Barcelo of Spain) presentation on “Do Not  Love The World“.

One of the things that I was reminded of at the conference was that missions as we seem to define it today, ‘sharing the Gospel to those without it’, is not something that suddenly appears in the New Testament.

Here in our text we have an example of just that scripture telling us that the nation of Israel was to do “Mission Work” in Declaring His glory among the nations and His wonders among all peoples.

among the nations,
בַגּוֹיִם֙ (ḇag·gō·w·yim)
Preposition-b, Article | Noun – masculine plural
Strong’s Hebrew 1471: A foreign nation, a Gentile, a troop of animals, a flight of locusts

among all
בְּכָל־ (bə·ḵāl)
Preposition-b | Noun – masculine singular construct
Strong’s Hebrew 3605: The whole, all, any, every

When we break down the Hebrew like this is is hard not to recognize the missions oriented mandate here in David’s words. This becomes even more apparent when we add in v.23 Sing to the Lord, all the earth; Proclaim the good news of His salvation from day to day. David says to sing and proclaim the good news (Gospel) of Salvation.

If we look at  Acts 13:46-47 Then Paul and Barnabas grew bold and said, “It was necessary that the word of God should be spoken to you first; but since you reject it, and judge yourselves unworthy of everlasting life, behold, we turn to the Gentiles. 47 For so the Lord has commanded us: ‘I have set you as a light to the Gentiles, That you should be for salvation to the ends of the earth.’ ”  this text in has Paul telling the Jewish leaders of the day, you were given the Mission of sharing proclaiming the good news and failed. Now God in his infinite sovereignty has called upon us to truly go to the ends of the earth.

They, the nation of Israel were to proclaim the good news of His salvation, that is the Lord God of Heaven and Earth. We now know that true salvation, eternal reconciliation and life with God comes only through His Son Christ Jesus. Yet the Missions Work has not changed we are still to Declaring His glory among the nations and His wonders among all peoples because v.25a the Lord is great and greatly to be praised;

Are you doing your part in Missions work today?