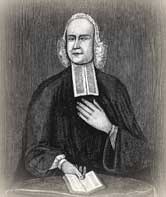 Many Christians have heard of William Carey, the Baptist preacher and cobbler who became known as the “Father of Protestant Missions.” Few have heard of John Ryland but there is a strong connection between the two.

Born in 1753 into a godly Baptist home, John was the son of a Hebrew scholar and pastor who taught him to read Hebrew at an early age: he could translate Psalm 23 at five and had read Genesis through in the original language several times before he was twelve. Despite his scripture learning and his attendance at church, John was not a Christian. A friend, who may never have guessed the effect his words would have, showed John his need for faith. John read several books on conversion around this time and rode an emotional roller coaster as he either hoped or despaired of salvation, recognizing that he lacked the intense desire for God that he felt he should have.

John finally was converted under George Whitefield’s preaching on this day, September 8, 1767 when he was fourteen. Five days later he was baptized in the Nene River by his own Father.

John, jr. was seventeen when he began to preach. He eventually took over as pastor of his father’s church at Northampton when his father moved on to other duties. It was John, jr. who baptized Carey in 1783–in the same river where he himself had been baptized.

John wrote several books and a number of hymns, including, “O Lord, I Will Delight in Thee,” two verses of which read,

When all created streams are dried,
Thy fullness is the same;
May I with this be satisfied
And glory in Thy Name.

No good in creatures can be found
But may be found in Thee;
I must have all things and abound
While God is God to me.

Along with a few friends, John began to urge the Particular Baptists to move away from their hyper-calvinist view of God’s sovereignty toward a more modern understanding of the need of human agency in missions. Nonetheless, when Carey urged the commencement of a mission work, it was John’s father who is supposed to have said to Carey, “Young man, sit down. When God pleases to convert the heathen, he will do it without your aid or mine.”

John, however, became a close associate and sponsor of Carey in his successful mission work. Highly regarded throughout England as a sensible, godly, hardworking man, he died at the age of 72.