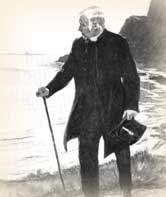 Henry Francis Lyte was desperately ill with tuberculosis. He did not expect to live. He was so sick, in fact, that he had prepared a farewell sermon to preach later on this morning, September 4, 1847. Meanwhile he drew a paper toward him on which he had begun to write some verses:

Abide with me; fast falls the eventide;
The darkness deepens; Lord with me abide.
When other helpers fail and comforts flee,
Help of the helpless, O abide with me.

His mind passed back over his life as he touched up the stanzas; and he wrote, “Thou on my head in early youth did smile…” Henry’s loving mother had taught him Bible stories and God’s love. However, his father abandoned the family. Henry’s mother soon died. Nine-year-old Henry was left alone in the world. A kindly Irish minister named Dr. Robert Burrows, with five children of his own, took Henry in and put him through school. (Later Henry paid the Rev. Burrow back all that he owed him.)

Henry planned to study medicine but weak health forced him to turn to the ministry instead. He won prizes at Trinity College, Dublin for poems–three years in a row–and a scholarship. In 1814 he graduated, and was ordained as a minister of the Church of England the next year.

The young clergyman tended Abraham Swanne, a dying pastor. Swanne’s deep faith and fearlessness in the face of death made a strong impression on Henry. He helped Swanne’s wife and family arrange their affairs while carrying on his own pastoral duties. As a consequence of his overwork, his health broke down. He had to go to warmer France to regain his health.

Henry pastored English churches the rest of his life. Twenty-three of those years were at Brixham, a Devonshire fishing town. His people loved him, for he took a strong interest in their work and visited the boats whenever they returned from sea. Anna Maxwell, his wife, visited the sick and lent a hand in the town’s projects. By careful management of household expenses, she saved enough money to send Henry to warmer France and Italy by himself every winter.

Fifty-four-year-old Henry was used to living with one foot in the grave when he preached his final sermon. He reminded his hearers that we must all die and that those who have embraced the death of Christ in their lives are best prepared to face the body’s death. “I stand here among you today, as alive from the dead, if I may hope to impress it upon you, and induce you to prepare for that solemn hour which must come to all, by a timely acquaintance with the death of Christ.”

He planned to go to Italy where he hoped sunshine and warmth would restore him. He made it only as far as Nice, France. There he became so ill he had to rest. Again God stayed with him in the form of an English clergyman who nursed him. Ten weeks after preaching his farewell sermon, Henry died.