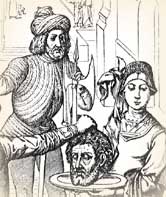 Herod Antipas smiled and nodded with approval. His step-daughter Salome* swayed and twirled in front of him and his birthday-party guests, her graceful figure filling them with longing. Her performance done, Herod and the guests applauded. What a dance! Inflamed by his senses and the mood of the moment, Herod cried, “Ask me what you want–up to half my kingdom–and it is yours!” And he swore a great oath to confirm his promise.

As a Tetrarch (ruler of one quarter of a Roman province) Herod was more than able to provide a handsome gift even by first century standards. Would Salome ask for a jeweled necklace? A dowry? A house? Herod and the guests waited to hear her request. The girl herself hesitated. Uncertain what to ask for, she whispered with her mother.

Down in the dungeons of Herod’s fortress (named Machaerus) a man’s fate was about to be decided. John the Baptizer was under lock and key in one of those gloomy holds. The cause was this: he had rebuked Herod for stealing another man’s wife–Herodias. This woman had been married to Herod’s quiet half-brother, Phillip. Herodias was furious, and convinced Herod to arrest John. Herod was only too willing; he was suspicious of the large crowds John attracted.

However, once Herod got John in his lockup, he talked with him and found he liked the guy. He didn’t understand what John was saying about holiness and salvation, but it seemed to be something he should hear. Instead of executing John, he gave him visitation privileges. Execution would be a bad idea, anyway: John had a lot of followers; why make them mad and risk rebellion?

Salome approached Herod. Evidently she had made up her mind. The guests and the king turned to hear what she would ask.

“Give me now the head of John the Baptizer on a platter!” said the girl.

Even that reckless, hardened lot must have drawn sharp breaths at the gruesome request. How quickly the indulgent mood melted. Did Herod’s face change? Here was an awkward demand! Used to thinking of people as objects, used to beheading men at a whim, it never occurred to him to say, “An incorruptible prophet like John the Baptizer is worth more than my whole kingdom.”

Looking around at his guests, he saw only one thing. If he was to save face, he must fulfill his promise. He ordered the execution. According to a long-standing tradition, John was beheaded on this day, August 29, probably around the year A.D. 28.

What happened to John’s head, we do not know. His disciples came and buried the body. Remains alleged to be his were later taken to Alexandria, Egypt and placed in a specially built church.

When John’s cousin Jesus heard the news, it hit him as hard as it would any of us. He tried to get away by himself for a time. John, who had preached Christ’s coming and prepared for his messianic ministry was needlessly dead in the prime of his life.

We have no sure knowledge of Salome’s fate. Herod and Herodias stuck together, performing desperate and diabolical deeds until they died.