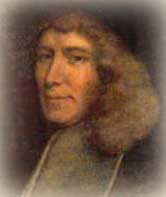 John Owen’s later years were hard. As a young man, he had been majestic in appearance; but long hours of study, the many troubles of his life, and disease wasted him. He died on this day, August 24, 1683 at Ealing (a few miles from London). But his funeral showed how highly he was regarded, for throngs attended, including many notable men.

At Oxford University, which he entered in 1628 at twelve years of age, John pored over books so much that he undermined his health by sleeping only four hours a night. In old age he deeply regretted this misuse of his body, and said he would give up all the additional learning it brought him if only he might have his health back. Naturally, he studied the classics of the western world, but also Hebrew, the literature of the Jewish rabbis, mathematics and philosophy. His beliefs at that time were Presbyterian, however, his ambition, although fixed on the church, was worldly.

John was driven from Oxford in 1637 when Archbishop Laud issued rules that many of England’s more democratically-minded or “low” church ministers could not accept. After this, John was in deep depression. He struggled to resolve religious issues to his satisfaction. While in this state, he heard a sermon on the text “Why are you fearful, O you of little faith?” which fired him with new decisiveness.

After that, John wrote a rebuke of Arminianism (a theology which teaches that man has some say in his own salvation or damnation although God is still sovereign). Ordained shortly before his expulsion from Oxford, he was given work at Fordham in Essex. After that he rose steadily in public affairs. Before all was over, he would become one of the top administrators of the university which expelled him and he even sat in Parliament.

He became a Congregationalist (Puritan) and took Parliament’s side in the English Civil Wars. Oliver Cromwell employed him in positions of influence and trust, but John would not go along when Cromwell became “Protector.” In spite of this, many of Parliament’s leaders attended John’s church.

John’s reputation was so great that he was offered many churches. One was in Boston, Massachusetts. John turned that down, but he once scolded the Puritans of New England for persecuting people who disagreed with them.

He also engaged in controversy with such contemporaries as Richard Baxter and Jeremy Taylor. Through it all, John focused his teaching on the person of Christ. “If Christ had not died,” he said, “sin had never died in any sinner unto eternity.” In another place he noted that “Christ did not die for any upon condition, if they do believe; but he died for all God’s elect, that they should believe.”

John wrote many books including a masterpiece on the Holy Spirit. Kidney stones and asthma tormented him in his last years. But he died peacefully in the end, eyes and hands lifted up as if in prayer.

Earlier this year we posted a series of devotionals based on Owens’ classic The Mortification of Sin. If you have never read Owen I highly recommend you do here is a link to his complete works online (vols 2-4 are some on my favs)

How and What are we to Preach? »
« Are Mental Impressions Divine Revelation?