Walk in newness of life 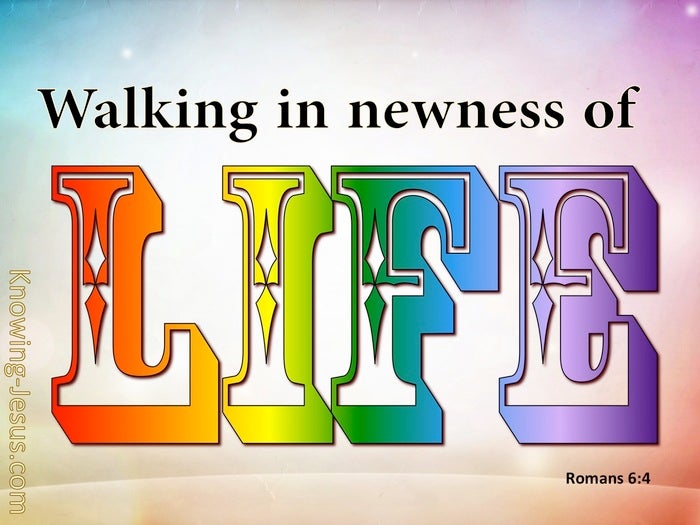 Therefore we are buried with him by baptism into death: that like as Christ was raised up from the dead by the glory of the Father, even so we also should walk in newness of life. (KJV)

In Romans 6:1-14 we find the Apostle Paul writing about a variety of things that occur when we are truly converted. We can only obtain this conversion from the old sinful man by being baptized into Jesus Christ were baptized into his death?(v.3). In other words were must as Jesus did partake of His sin sacrifice at Calvary through a Spiritual death and rebirth (1 Corinthians 12:13).

Our main verse here and others like (2 Corinthians 2:16-17) makes it crystal clear that all who are truly converted will walk in [the] newness of life. So what does this phrase, mean? Again it is fairly simple, true converts are not those who just go to an alter, pray a prayer and get there ‘get out of hell card’ only to show no signs of true repentance. Walking in the newness of life, means a transformation has taken place not just on the inside (Spiritual) but on the outside our daily moral character.

Everything about our way of life changes, we no longer find pleasure (although we sometimes fail) in the sinful Works of the Flesh instead we rejoice daily as we mature in the Fruits of the Spirit.

Commentary Critical and Explanatory on the Whole Bible

Therefore we are — rather, “were” (it being a past act, completed at once). buried with him, by baptism into death — (The comma we have placed after “him” will show what the sense is. It is not, “By baptism we are buried with Him into death,” which makes no sense at all; but, “By baptism with Him into death we are buried with Him”; in other words, “By the same baptism which publicly enters us into His death, we are made partakers of His burial also”). To leave a dead body unburied is represented, alike in heathen authors as in Scripture, as the greatest indignity (Revelation 11:8, Revelation 11:9). It was fitting, therefore, that Christ, after “dying for our sins according to the Scriptures,” should “descend into the lower parts of the earth” (Ephesians 4:9). As this was the last and lowest step of His humiliation, so it was the honorable dissolution of His last link of connection with that life which He laid down for us; and we, in being “buried with Him by our baptism into His death,” have by this public act severed our last link of connection with that whole sinful condition and life which Christ brought to an end in His death.

that like as Christ was raised from the dead by the glory of the Father — that is, by such a forth-putting of the Father‘s power as was the effulgence of His whole glory.

even so we also — as risen to a new life with Him.

should walk in newness of life — But what is that “newness?” Surely if our old life, now dead and buried with Christ, was wholly sinful, the new, to which we rise with the risen Savior, must be altogether a holy life; so that every time we go back to “those things whereof we are now ashamed” (Romans 6:21), we belie our resurrection with Christ to newness of life, and “forget that we have been purged from our old sins” (2 Peter 1:9). (Whether the mode of baptism by immersion be alluded to in this verse, as a kind of symbolical burial and resurrection, does not seem to us of much consequence. Many interpreters think it is, and it may be so. But as it is not clear that baptism in apostolic times was exclusively by immersion [see on Acts 2:41 ], so sprinkling and washing are indifferently used in the New Testament to express the cleansing efficacy of the blood of Jesus. And just as the woman with the issue of blood got virtue out of Christ by simply touching Him, so the essence of baptism seems to lie in the simple contact of the element with the body, symbolizing living contact with Christ crucified; the mode and extent of suffusion being indifferent and variable with climate and circumstances).

Listen to Him »
« Does Baptism Save You?