1st of Many George Whitefield Sermons 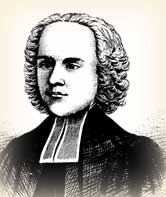 George Whitefield made it his business to find salvation for his soul. He joined a group of like-minded men, the Holy Club, to which John and Charles Wesley also belonged, and exceeded the other members in zeal and good works. He was a familiar visitor of prisoners. For long hours he studied religious works. He fasted until his health broke. He prayed on his knees under a hedge in the cold. For all his hard work his soul was unsatisfied.

He would have despaired, except he felt the Lord had promised him he would yet be saved. The Wesleys sailed to Georgia on a futile mission. They, too, would find peace only when their hearts were warmed by the Holy Spirit. This did not come about until each recognized that salvation was by grace, a free gift through Jesus Christ rather than by works. To live a life of faith was to be born again; it was to be “in” Christ and have Christ in oneself. Once Whitefield grasped this, peace flooded his heart.

He returned to school, pouring out this truth to others. As his health recovered, he trained toward being ordained so that he could enter full-time ministry. His efforts at private evangelism continued. What before had been labor was now an act of joy. But as ordination neared, he trembled. Despite having studied the scriptures line by line on his knees, he felt unprepared. As the day for ordination approached, he found relief in prayer. In May he was publicly examined by men who desired to embarrass him.

Bishop Benson believed Whitefield was the kind of man the church needed. To quiet the young man’s mind, he promised there would be no public examination at his ordination. June 20, 1736 came. “I attempted to behave with unaffected devotion, suitable to the greatness of the office I was to undertake.” He read over Paul’s advice to Timothy and determined to let no one to despise him for his youth.

A week later, on this day, June 27th, 1736, Whitefield preached his first sermon. He took as his topic the need for Christians to help one another. At first he was awkward, for his mother, his brothers and sisters, and many who had known him as a youngster were in the audience. As he proceeded, the Spirit filled him. Those who came to listen were so moved by the authority of his words that parishioners complained to the bishop that some had gone “mad.”

Whitefield himself wrote, “Glory! Glory! Glory! be ascribed to an Almighty Triune God.” He went on to preach thousands more powerful sermons. He became a force in the Great Awakening which brought fresh life to America’s churches. His last sermon was preached in 1770. He was then desperately ill but, mounting a barrel, urged his listeners to examine themselves whether they were in the faith. To be saved, they must be born again, he urged. The following morning he died.

We all Need Help »
« Is Judgment Always Forbidden?