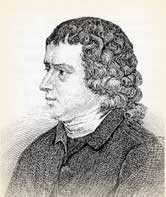 Who was Robert Robinson?

Robert Robinson was just a small boy when his dad died. In 18th century England, there was little in the way of a social welfare system and this meant that he had to go to work while still very young. Without a father to guide and steady him, Robert fell in with bad companions.

One day his gang of rowdies harassed a drunken gypsy. Pouring liquor into her, they demanded she tell their fortunes for free. Pointing her finger at Robert she told him he would live to see his children and grandchildren. This struck a tender spot in his heart. “If I’m going to live to see my children and grandchildren,” he thought, “I’ll have to change my way of living. I can’t keep on like I’m going now.”

Robert Robinson decided to go hear the Methodist preacher George Whitefield. To cover his “weak” urge, he suggested that the boys go with him and heckle the gathering. Whitefield preached on the text: “O generation of vipers, who hath warned you to flee from the wrath to come?” (Matthew 3:7). Robert left in dread, under a deep sense of sin that lasted for three years.

Finally, at the age of twenty, Robert made peace with God and immediately set out to become a Methodist preacher himself. Two years later, in 1757, he wrote a hymn which expressed his joy in his new faith:

Come, Thou Fount of every blessing,
Tune my heart to sing Thy grace
Streams of mercy, never ceasing,
Call for songs of loudest praise.
Teach me some melodious sonnet,
Sung by flaming tongues above.
Praise the mount! I’m fixed upon it,
Mount of Thy redeeming love.

This was printed the next year. At first people thought that Selina Hastings, the Countess of Huntingdon, a strong Methodist had written this. Eventually it was learned that Robert was the writer.

In the last stanza, Robert had written:

Prone to wander, Lord, I feel it,
Prone to leave the God I love
Take my heart, O take and seal it
Seal it for thy courts above.

Prone to wander Robert was. He left the Methodists and became a Baptist. Later on, having become a close friend of Joseph Priestly, he was accused of becoming a Unitarian. Priestly and other Unitarians denied the full divinity of Christ. However, in a sermon he preached after he supposedly became a Unitarian, Robinson clearly declared that Jesus was God, and added, “Christ in Himself is a person infinitely lovely as both God and man.”

Robert Robinson died on this day, June 9, 1790. Had he left the God he loved? A widely-told, but unverifiable, story says that one day as he was riding in a stagecoach a lady asked him what he thought of the hymn she was humming. He responded, “Madam, I am the poor unhappy man who wrote that hymn many years ago, and I would give a thousand worlds, if I had them, to enjoy the feelings I had then.”

Come, Thou Fount of Every Blessing

Come, Thou Fount of every blessing,
Tune my heart to sing Thy grace;
Streams of mercy, never ceasing,
Call for songs of loudest praise.
Teach me some melodious sonnet,
Sung by flaming tongues above.
Praise the mount! I’m fixed upon it,
Mount of Thy redeeming love.

Sorrowing I shall be in spirit,
Till released from flesh and sin,
Yet from what I do inherit,
Here Thy praises I’ll begin;
Here I raise my Ebenezer;
Here by Thy great help I’ve come;
And I hope, by Thy good pleasure,
Safely to arrive at home.

Jesus sought me when a stranger,
Wandering from the fold of God;
He, to rescue me from danger,
Interposed His precious blood;
How His kindness yet pursues me
Mortal tongue can never tell,
Clothed in flesh, till death shall loose me
I cannot proclaim it well.

O to grace how great a debtor
Daily I’m constrained to be!
Let Thy goodness, like a fetter,
Bind my wandering heart to Thee.
Prone to wander, Lord, I feel it,
Prone to leave the God I love;
Here’s my heart, O take and seal it,
Seal it for Thy courts above.

O that day when freed from sinning,
I shall see Thy lovely face;
Clothed then in blood washed linen
How I’ll sing Thy sovereign grace;
Come, my Lord, no longer tarry,
Take my ransomed soul away;
Send thine angels now to carry
Me to realms of endless day.

Crossroads »
« Don’t Give Up