God has a habit of using the “least of these” (Matthew 25:45) to bring about His kingdoms work. Be ready to answer the call. 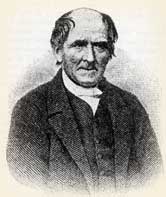 “Run, Billy.” Deep inside the tin mine, instinct screamed at Billy Bray. He dropped his work and fled. Moments later, forty tons of roof collapsed on the very spot where he had been standing.

Inwardly Billy shook with terror. He knew as surely as he was standing there alive that if the mine had collapsed on him, he would have gone straight to hell. For although Billy was raised in a Methodist home, he had turned to alcohol and become one of the wickedest workers in the mine. Born on this day, June 1, 1794, at Twelveheads in Cornwall, England, he had the makings of greatness. He was lively, energetic, good humored, full of spirit and courage: always the life of the party. But inside he was filled with terror.

“I used to dread to go to sleep for fear of waking up in hell; and though I made many promises to the Lord to be better, I was soon as bad or worse than ever,” he said. His escape from the collapsing mine had a great effect on him.

A friend gave Billy a John Bunyan book: Visions of Heaven and Hell. Billy was impressed by the glory of heaven and wanted to be part of it. Then he read how in hell those who were friends on earth would blame one another for not turning each other away from sin. Billy had a close friend that he drank with. The thought of the two of them accusing each other for all eternity troubled him.

Billy’s wife had known the Lord as a child but drifted away. One night Billy had a talk with her. She remembered with bitter regret how wonderful it was to serve the Lord. “Why don’t you begin again?” asked Billy. He said he might become a Christian if she would return to Christ. That night he went to bed, knowing he should pray. But he was ashamed to do so in front of her.

At three in the morning he awoke. He realized suddenly that if he waited for his wife to get right with God, he might die without salvation. Then and there he got down on his knees and prayed for mercy. The next day was payday. For the first time in years, he came home sober. He spent hours reading the Bible and praying, crying out for salvation. He took a day off work to seek God.

Finally, days later, he prayed to God, “You have said, ‘Those that ask shall receive, those that seek shall find, and to them that knock the door shall be opened,’ and I have faith to believe it.” In that instant the Lord made him so happy that he could not express what he felt. Billy shouted for joy and did not stop until the day he died. Within a week of his conversion his wife made peace with Christ, too.

To the end of his life, Billy sang out loud, danced as he walked and shouted praise to the Lord. Some Christians felt this was improper behavior. But Billy kept on. In November 1823 he began telling others about the Jesus who had brought such joy to his life.

There was at that time an association of Methodists known as the Bible Christians because of their habit of carrying Bibles under their arms. Billy joined them. At the end of 1824, he became a local preacher. His sincerity and good humor made him a welcome speaker. When it was announced he was to preach, the chapel would be crammed. His greatest work was with fellow miners.

Worthy of the Calling »
« Four Geological Evidences for a Young Earth