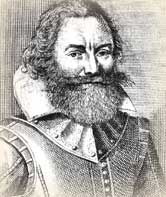 The English first attempted to settle the New World in Virginia. The first Anglican worship ceremony of the Jamestown party in the new world was held on this day, April 29, 1607. “The nine and twentieth day, we set up a Crosse at Chesupioc [Chesapeake] Bay, and named that place Cape Henry,” wrote Captain John Smith. Reverend Robert Hunt led them in a service. The colonists would soon establish a place of worship.

If Christians erect a facility to worship in, what should it look like? The Virginia sanctuary was not a typical church building. It was a simple shrine in the forest covered with a tattered sailcloth. The altar was a plank nailed between two trees.

By the end of that summer, however, the colonists had built a wooden church inside the Jamestown fort. John Smith said it looked more like a barn than anything else. By January of the next year it had burned down.

The colonists built a new sanctuary to take its place. This is where Pocahontas and John Rolfe were married in 1614.

Three years later, yet another wooden church building was erected, this one outside the walls of the fort. Virginia’s House of Burgesses, the first representative assembly in America, met in this church in 1619; obviously the much talked-about wall of separation between the church and state had not yet been erected!

Virginia itself was a parish of the Church of England, an overseas extension of the diocese of London. Robert Hunt was the first chaplain of the Jamestown settlement. His task was difficult, because most of the early colonists to Virginia were more interested in this world’s riches than in spiritual treasures. Rev. Hunt held regular services in the Jamestown church while also working diligently for the physical well-being of the colony. It was he who built the first colonial grist mill. Much of his time, however, was spent caring for the many sick and dying in the colony and defusing quarrels among the settlers.

In 1639 the prospering colonists built a new brick church in Jamestown, and added a brick tower in the 1640s. The remains of this church tower can still be seen–one of the oldest English-built edifices standing in the United States today. The Anglican faith (now known as Episcopal) was in America to stay.

Fear the Lord »
« 10 Things You Should Know about Reformed Theology