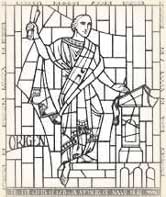 Have you ever known a teenager who loved Christ so much that he was eager to die for him? A man so brilliant that he kept seven secretaries busy recording his torrent of thought? Someone so eager to walk close to the Lord that he fasted every Wednesday and Friday? Origen was such a person, a saintly man of rare brilliance, an author of thousands of works.

Born in Alexandria, Egypt about 185, Origen was reared in a Christian home. His father, Leonides, sent him to the best teachers in town and had his son memorize Scripture every day. When Leonides went to prison for his faith about 202, Origen encouraged him not to deny Christ. He planned to surrender himself to the authorities so that he could join his father in prison, but his mother hid his clothes. Leonides was martyred and his property confiscated, leaving the family destitute.

A wealthy woman assisted Origen; he was able to teach the Greek language and copy manuscripts for a living. When the young man was about 18, the Bishop of Alexandria made him head of a church school in Alexandria. Origen was responsible to instruct new converts. He soon found that he needed to answer the arguments of heretics, Jews, and pagans. He studied with a leading philosopher in order to learn how to refute pagan arguments against the Christian faith.

To remove any hint of scandal as he taught young women their catechism, Origen castrated himself, literally following Matthew 19:12. He later realized that his action was ill-advised and not to be taken as an example. Origen also strictly followed Christ’s words in Matthew 10:10–he had only one coat, no shoes, and took no thought for the next day. He refused gifts or pay from his pupils, ate no meat, drank no wine, and slept on the bare floor. Much of the night he spent in prayer and study. He helped friends and pupils when they went to prison for their faith.

During his early years at Alexandria, Origen wrote On First Principles, the first systematic theology ever produced. For 28 years he worked on another book, the Hexapla, a massive work of Old Testament textual analysis. He was one of the few churchmen before the Reformation who learned Hebrew to assist his study of the Old Testament. Origen’s method of interpreting Scripture tremendously influenced the Middle Ages. He found three levels of meaning in it: the literal, the moral and the allegorical. He used allegory to reveal Christ in the Old Testament.

Paradoxically, Origen can be called both a father of orthodoxy and a heretic. He wrote at a time when the church was defining its basic doctrines. His contributions have helped theologians for centuries. But his active mind also led him into speculations that the Church rejected. In fact, church councils held in 231 and 232 enacted motions against Origen, and excommunicated him.

Origen found refuge in Palestine and Arabia. The faith was still dear to him. During a third century persecution, pagans threw him into prison. Tortured and condemned to die, only the death of Emperor Decian saved him from execution. But Origen’s health was broken. He was close to 70 when he died in 253 or 254.

Though he made serious mistakes, Origen’s contribution was inestimable. One of his students, the church father Gregory of Nazianzus, aptly summed him up as “the stone that sharpens us all.” Because no definite dates are associated with Origen’s life, we have chosen this day, April 22, to recognize his contribution to the church.