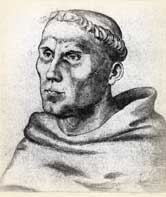 Since your majesty and your lordships desire a simple reply, I will answer without horns and without teeth. “Unless I am convicted by scripture and plain reason–I do not accept the authority of popes and councils for they have contradicted each other–my conscience is captive to the Word of God. I cannot and I will not recant anything, for to go against conscience is neither right nor safe. Here I stand, I cannot do otherwise, God help me. Amen.”

Perhaps the most notable words spoken in the Reformation, this according to early printed reports, was Luther’s reply at Worms when urged to recant. He uttered the memorable lines in German on this day, April 18, 1521, and then, upon request, repeated their gist in Latin for those who did not understand his native tongue. He was sweating, said witnesses. With a victory gesture he slipped out of the room.

Frederick the Wise, Luther’s supporter was uneasy. Did the scriptures condemn Luther or not? “He is too daring for me,” the elector admitted. Nonetheless, on the next day, when asked to stand against Luther with the emperor, he did not sign the condemnation although the other four electors did so.

As for the Emperor, he reasoned that a single friar who went contrary to the whole church could not possibly be right. Descended from a long line of Christian emperors, he felt that to accept Luther’s view was to betray the faith of his fathers. He would take prompt action against Luther, he vowed. But since Luther had been given safe conduct to Worms, he allowed him to depart in safety.

Luther did not leave Worms at once. For several days a committee reasoned with him, begging him not to rend the church in two. They pointed out that war would surely come to Germany. Melanchthon, his beloved associate, might be killed. Luther could not help but be moved, but his determination held. God’s word must be followed whatever the cost. To this confrontation his stand against indulgences had finally brought him.

There are grounds to doubt that Luther said “Here I stand. I cannot do otherwise.” Although the earliest printed versions contain these lines, the official transcripts do not. Whether spoken or not, the words convey the brave monk’s attitude. When Luther left Worms, the Reformation was irrevocable.

Martin Luther was at his noblest at Worms. His bold words have stirred men’s imagination through subsequent centuries, for they have the same ring to them as Peter’s famous defiance of the Sanhedrin. “Judge for yourselves whether we ought to obey God or men.”