ARTHUR PINK WROTE ONE OF MANY LETTERS 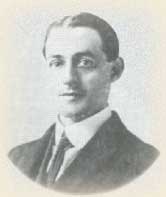 Arthur Pink is often described as an eccentric. He didn’t really fit in anywhere. Converted to Christ out of a theosophical background (the New Age movement of his day), he became a student of Puritan thought. But his efforts at pastoring churches and evangelization were not successful. Nor did his books sell. A monthly magazine that he edited called Studies in the Scriptures, never topped a circulation of 1,000. The last sixteen years of his life, he spent on the Isle of Lewis, Scotland, in virtual isolation by his own choice, rejecting formal association with any church.

Explaining his hermit-like existence, he quoted Jesus as saying, “If the world hate you, ye know that it hated me before it hated you.” He went on to ask, “What world hated Christ and hounded him to death? The religious world, those who pretended to be most zealous for God’s glory.” He seemed to take pride in his “persecution,” although some of the men he disagreed with were among the greatest Christians of the century.

Nonetheless, Arthur came to have a significant influence. Upholding Calvinism, he countered a growing trend toward acceptance of Arminian views, even in churches like the Baptists that had traditionally been Calvinist. (In simplified terms, Arminians emphasize man’s free choice in salvation; Calvinists insist on God’s complete sovereignty.)

From his remote hideaway, Arthur issued his scripture studies. He also hand-wrote letters in response to many questions that came his way, sometimes more than forty letters a week. His scripture studies and the Bible studies sparkled with quotable gems.

For example, on this day, March 14, 1937 he wrote in a letter, “Neither the nearness nor the remoteness of Christ’s return is a rule to regulate us in the ordering of our temporal affairs. Spiritual preparedness is the great matter.”

After his death in 1953, Arthur’s Bible studies began to be reprinted. Today there are dozens of these on the market, with sales in the hundreds of thousands. Many of them appear on the web. Their many thoughtful sayings make them memorable:

“We do not ask, Is Christ your ‘Savior,’ but is He, really and truly, your Lord? If He be not your Lord, then most certainly He is not your ‘Savior.’ “

Through his writings, Arthur Pink had more success after his death than in his life.

One of the best resources for A.W. Pink can be found at the The Chapel Library

Adorn the Doctrine »
« The Problem Isn’t the Great Commission