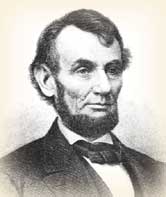 Historians have argued whether or not Abraham Lincoln, one of America’s best-known presidents, ever became a committed Christian. As a youth Lincoln mocked the scriptures. After the death of his favorite son, Willie, he groped for some hope which could give him solace. His wife Mary and he attended seances, but eventually renounced them as fraudulent. The cares and trials of the war drove Lincoln increasingly to his Bible.

His lifelong friend Joshua Speed remembered, “As I entered the room near night, [Lincoln] was sitting near a window reading his Bible. Approaching him, I said, ‘I am glad to see you profitably engaged.’ ‘Yes,’ said he, ‘I am profitably engaged.’ ‘Well,’ said I, ‘if you have recovered from your skepticism I am sorry to say that I have not!’ Looking me earnestly in the face, and placing his hand upon my shoulder, he said: ‘You are wrong Speed; take all of this book upon reason that you can, and the balance on faith and you will live and die a happier and better man.'”

Many of Lincoln’s communications allude to God. In his personal correspondence to Mrs. Gurney, a Quakeress, he wrote, “We hoped for a happy termination of this terrible war before this; but God knows best and has ruled otherwise.” Increasingly he saw himself as an instrument of the Lord’s will, inscrutable though that might be.

He wrestled to understand why the North continued to lose although its cause, the abolition of slavery and preservation of the union, seemed the more justifiable side. In the end, in a note not written for public consumption, Lincoln concluded that “the will of God prevails. . . .Both [sides] may be wrong. . . .in the present civil war it is quite possible God’s purpose is something quite different from the purpose of either party.”

There was as much sin to evoke God’s wrath upon the Union as on the slave-owning Confederacy. On August 12, 1861 he issued a proclamation in the Northern States for a day of public humiliation, prayer and fasting “to be observed by the people of the United States with religious solemnities. … It is peculiarly fit for us to recognize the hand of God in this terrible visitation, and in sorrowful remembrance of our own faults and crimes as a nation and as individuals to humble ourselves before Him, and to pray for His mercy… ”

The fast was observed on this day, September 26, 1861, the last Thursday of the month. As anyone knows who is familiar with the history of the war, the fighting ground along for another three years, chewing up the lives and limbs of men in prodigious numbers. In the end Lincoln himself was assassinated. He left a legacy of profound words.