Comfort for the Grieving, Hurting, and Dying Series – Part VI

Today we continue our series by looking at the third stage of the 5 Stages of Grief, Depression.

Like so many other things Christians with enough faith should never get is depressed. At least that was the story we got told about my wife’s condition from a so called well meaning “friend”. Of course, this well-meaning person also was not a doctor and did no investigative questioning before blurting out the statement. I mention this not for sympathy, but to underscore the need for Chaplains and Ministers to make all due diligence in understanding the condition and history of those they are serving. I know with HIPAA this can be daunting but being well informed can greatly help in our care, comfort and counsel process.

I have yet to meet anyone going through the grief process that does not experience Depression in some manner. The obvious signs will usually manifest themselves as feelings of intense sadness, hopelessness, lack of energy, and other very detrimental effects that may affect the individual. It is important to note that these can be sublime and hidden in some folks. Again, using my wife, for example, she suffered a stroke due to poisoning before we met. She suffers from depression that is treated with counseling and medication. Her response to loss, like the recent death of her mom, is “I’m alright” even though she clearly was not. Like most folks (estimates as high as 67% of people suffering from depression) She just tries to grin and bear it. My wife because of her medical condition processes things differently and we (chaplains/ministers) need to be on the alert for this and any out of the “ordinary” situation and know when we are in over our heads. Here is a good list of types of depression.

So, what is depression? First depression is not just being sad. I lost my wedding band a few months ago, I was sad (even a little afraid of what my wife would say 😀)) but not depressed. Depression is sad on super steroids. It is constant here is the clinical definition:

The clinical definition, based on the fifth edition of the Diagnostic and Statistical Manual of Mental Health Disorders (DSM-5), is “a period of at least two weeks when a person experienced a depressed mood or loss of interest or pleasure in daily activities and had a majority of specified symptoms, such as problems with sleep, eating, energy, concentration, or self-worth.” This definition excludes grief after mourning.

Before we move on I think it would be helpful reminder to list some of the things that one could encounter as a Chaplain/Minister in the Grief process that could lead to depression:

The second thing to note about depression is that is often MISDIAGNOSED. Far too often healthcare professionals and Chaplains/Ministers are quick to say someone who has experienced one of these issues is depressed. Many times they are simply melancholy, which means intense sadness but a far cry from clinically depressed.

Another thing that might surprise some is that stage 2 (ANGER) can rear its ugly head here again. Let me explain, folks can socially withdraw a clear sign of depression setting in, if you try and force them out of that they can become hostile. Other symptoms of Grief/Depression include:

The last thing I have learned about this stage of Grief counseling is in this stage of Depression, where folks begin to address feelings that have been put off (consciously or unconsciously) such as abandonment, helplessness, loneliness, fear, despair, agony, etc. These are things that they did not look at during the stages of denial, anger, and bargaining.

I am not a professional Licensed Christian Counselor/Clinical Psychologist or Psychiatrist, if dealing with my wife’s condition has taught me anything, it is I need to be involved and I need to leave much of that stuff to the professionals.

As the Psalm says, we can be that care comfort, and wise counsel of the Lord’s Law to those who are in need. I am convinced it is here that Chaplains/Ministers can have the greatest impact. Again offering the care, comfort, and (compassionate) counsel that God has called us to do.

The Contradictory Ways We Talk about the Unborn 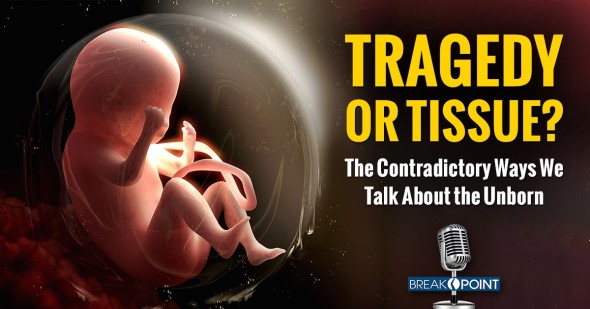 If it weren’t so jarring and tragic, the contradictory laws and language tolerated in our country about abortion would be laughable.

On the one hand, we prosecute anyone who harms a pregnant woman and causes her to lose her baby, sometimes even charging them with murder. Meanwhile, that same woman could legally have her unborn child killed with no consequences just down the street. We have baby announcements—not fetus announcements—and yet, most people who call themselves “pro-choice” insist on referring to the victim of abortion as something other than a baby. According to Ruth Bader Ginsburg, a pregnant woman who is “abortion-minded” is not a mother, but apparently any other pregnant woman is.

And then there’s miscarriage—a tragedy familiar to millions of women in this country, as well as their families. In her memoir, former first lady Michelle Obama tells about a miscarriage she suffered, and how she’d grieved as if she’d lost a child. Because of course, she had.

Recently, NPR highlighted Mrs. Obama’s story and others like it in a segment on “demystifying miscarriage.” It’s a powerful hour of radio, filled with women describing the heart-wrenching grief of losing a baby. One described it as a “loss of a secret companion,” and others talked of their longing to protect their tiny children, even after they were gone.

Tragically, our culture and our laws de-legitimize the grief of miscarriage, communicating to mothers, indirectly and sometimes directly, that it’s no big deal. Nearly all of the mothers interviewed by NPR described how few people seemed to fully appreciate what they had gone through, even shrugging off their tragedies as if they hadn’t really lost something or someone precious.

Incredibly, NPR even tried to make the case that restrictions on abortion have harmed women who’ve suffered miscarriages! This government-funded outlet ignored the government-funded industry that dehumanizes the unborn and treats their deaths as no big deal.

In fact, a recent documentary on another government-funded media outlet, PBS, goes to even greater lengths to normalize abortion, even comparing it to miscarriage as a way of convincing viewers that it’s no big deal. Who’s minimizing miscarriage, again?

In the documentary, a mother at a Philadelphia “women’s center” is filmed taking the abortion pill RU486 while a doctor describes the twins she is carrying as “pregnancy tissue.” Medical abortions are an increasingly common early-term form of abortion that are carried out entirely with medication.

“A medical abortion is very similar to inducing a miscarriage,” explains the doctor, later describing the “miscarriage symptoms” her patient will experience when she takes the second drug to expel her baby.

What an insult to the millions of women who know what a miscarriage means. Disturbingly, this mother made it clear she knew what abortion means: “What I hope I feel,” she said, “is a sense of peace…with these two beings that I’ve chosen not to bring into the world. Thank you for choosing me,” she tells them. “I’m honored to be given this gift of life. And also, I can’t do it right now.”

The attempt to sentimentalize abortion isn’t just misguided and wrong. It’s an insult to every woman who has suffered the unchosen loss of miscarriage. More than that, it demonstrates a culpable knowledge—on the part of this woman, PBS, NPR, and everyone else involved in this industry of death—of what really happens when a doctor ends a pregnancy by abortion.

That muffling gauze of medical euphemisms cannot change what is true. Even abortive women themselves, some who are stricken with grief, can’t suppress it either.

Our prayers to end this casual destruction of life should include, on behalf of our whole nation, an acknowledgement: “Father, forgive us, for we know what we’re doing.”