It seems that everyone wants and needs to blame someone else for their mistakes, suffering or overall lot in life. What is worse for me is I hear it and see it regularly in those claiming to be evangelical Christians.

It is mans fallen nature to lie and blame others for our failures. The very first thing that Adam, the father of all mankind did after eating the forbidden fruit was lie and blame Eve: The man said, “The woman whom you gave to be with me, she gave me fruit of the tree, and I ate” Genesis 3:12. (ESV)

Then God in the next verse turns to Eve and she too lies and blames Satan: Then the Lord God said to the woman, “What is this that you have done?” The woman said, “The serpent deceived me, and I ate.”

Many years ago for a local New England prison newsletter I wrote an article entitled “Flip Wilson Theology.” The premise being that folks like to blame others for their mistakes and “Christians” especially like to blame the Devil for everything. But “the devil made me do it” (one of Wilson’s signature catchphrases) was and is totally unbiblical.

What is biblical? Look at Mark 7:20-23 (AMP) And He said, What comes out of a man is what makes a man unclean {and} renders [him] unhallowed. (21) For from within, [that is] out of the hearts of men, come base {and} wicked thoughts, sexual immorality, stealing, murder, adultery, (22) Coveting (a greedy desire to have more wealth), dangerous {and} destructive wickedness, deceit; unrestrained (indecent) conduct; an evil eye (envy), slander (evil speaking, malicious misrepresentation, abusiveness), pride (the sin of an uplifted heart against God and man), foolishness (folly, lack of sense, recklessness, thoughtlessness). (23) All these evil [purposes and desires] come from within, and they make the man unclean {and} render him unhallowed.

In the end we must conclude with the Apostle Paul in Romans 1:20 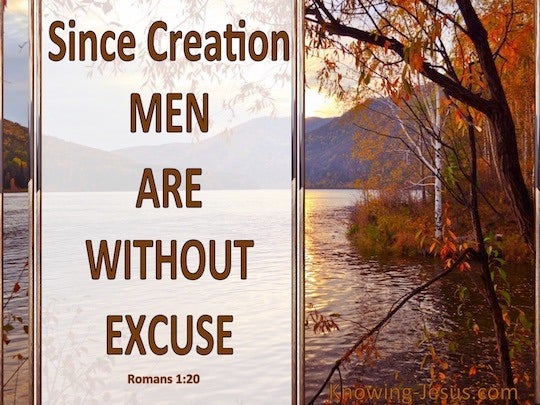 For ever since the creation of the world His invisible attributes, His eternal power and divine nature, have been clearly seen, being understood through His workmanship [all His creation, the wonderful things that He has made], so that they [who fail to believe and trust in Him] are without excuse and without defense. (AMP)

The book of Jude is often overlooked by readers and theologians alike but it contains a strong Warning to the Ungodly and those who would play the blame game:

It was about these people that [h]Enoch, in the seventh generation from Adam, prophesied, when he said, “Look, the Lord came with [i]myriads of His holy ones 15 to execute judgment upon all, and to convict all the [j]ungodly of all the ungodly deeds they have done in an ungodly way, and of all the harsh and cruel things ungodly sinners have spoken against Him.” 16 These people are [habitual] murmurers, griping and complaining, following after their own desires [controlled by passion]; they speak arrogantly, [pretending admiration and] flattering people to gain an advantage. (Jude 14-16)

It is man’s nature to play the blame game but it should not be that of true “Christians.” We should want righteous discernment that leads to the truth but must heed the warning of Christ in Matthew 7:3-5.

Instead of blaming others for your circumstances do something to change them. Even in these trying times GOD can provide. Do all you can to restore your right relationship with Him now.

Instead of blaming this one or that one for having to Shelter in Place, try doing something productive to help your community. Try volunteering at a church that is handing out food, sewing masks, shopping for an elderly neighbor.

If you must post something on Social Media, do your due diligence to insure it is fair and accurate. It is SO EASY to click and share JUNK! Just because you agree with something emotionally does not make it true.

Finally, to quote my wife when ever I am down about something she never lets me even think about blaming my disabilities, or others, or anything she just says “suck it up buttercup soldier on.”  You would have to know my wife to understand she means this in the most loving and compassionate way, as I do to everyone here. Sometimes we just need to pray and pull ourselves up and get at it. No excuses, no blaming others for with Christ we can accomplish all things.