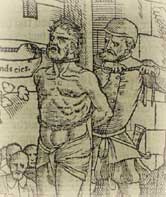 How many Bibles do you have in your house? For most of us, Bibles are easily accessible, and many of us have several. That we have the Bible in English owes much to William Tyndale, sometimes called the Father of the English Bible. 90% of the King James Version of the Bible and 75% of the Revised Standard Version are from the translation of the Bible into English made by William Tyndale, yet Tyndale himself was burned at the stake for his work on this day, October 6, 1536.

Over one hundred years later, however, William Tyndale had a burning desire to make the Bible available to even the common people in England. After studying at Oxford and Cambridge, he joined the household of Sir John Walsh at little Sudbury Manor as tutor to the Walsh children. Walsh was a generous lord of the manor and often entertained the local clergy at his table. Tyndale often added spice to the table conversation as he was confronted with the Biblical ignorance of the priests. At one point Tyndale told a priest, “If God spares my life, ere many years pass, I will cause a boy that driveth the plow shall know more of the Scriptures than thou dost.”

It was a nice dream, but how was Tyndale to accomplish this when translating the Bible into English was illegal? He went to London to ask Bishop Tunstall if he could be authorized to make an English translation of the Bible, but the bishop would not grant his approval. However, Tyndale would not let the disapproval of men stop him from carrying out what seemed so obviously God’s will. With encouragement and support of some British merchants, he decided to go to Europe to complete his translation, then have it printed and smuggled back into England.

Tyndale Follows God’s Will to Germany

In 1524 Tyndale sailed for Germany. In Hamburg, he worked on the New Testament, and in Cologne, he found a printer who would print the work. However, news of Tyndale’s activity came to an opponent of the Reformation who had the press raided. Tyndale himself managed to escape with the pages already printed and made his way to the German city Worms where the New Testament was soon published. Six thousand copies were printed and smuggled into England. The bishops did everything they could to eradicate the Bibles — Bishop Tunstall had copies ceremoniously burned at St. Paul’s; the archbishop of Canterbury bought up copies to destroy them. Tyndale used the money to print improved editions!

King Henry VIII, then in the throes of his divorce with Queen Katherine, offered Tyndale a safe passage to England to serve as his writer and scholar. Tyndale refused, saying he would not return until the Bible could be legally translated into English. Tyndale continued hiding among the merchants in Antwerp and began translating the Old Testament while the King’s agents searched all over England and Europe for him.

Tyndale was finally found by an Englishman who pretended to be his friend but then turned him over to the authorities. After a year and a half in prison, he was brought to trial for heresy — for believing, among other things, in the forgiveness of sins and that the mercy offered in the gospel was enough for salvation. In August 1536, he was condemned; on this day October 6, 1536, he was strangled and his body burned at the stake. His last prayer was “Lord, open the King of England’s eyes.” The prayer was answered in part when three years later, in 1539, Henry VIII required every parish church in England to make a copy of the English Bible available to its parishioners.