I have a very early morning doctor’s appointment with the local Pain clinic for my back and neck so I will not have time to write the next in our series this morning. Here is an excellent devotional from Grace to You ministries that was in this morning’s inbox.

“Blessed are the peacemakers, for they shall be called sons of God” (Matt. 5:9).

People often define peace as the absence of conflict, but God sees it differently. The absence of conflict is merely a truce, which might end overt hostilities but doesn’t resolve the underlying issues. A truce simply introduces a cold war, which often drives the conflict underground, where it smolders until erupting in physical or emotional disaster.

James 3:17 says, “The wisdom from above is first pure, then peaceable.” Godly wisdom, purity, and peace go hand- in-hand. Peace is wisdom in action and is never established at the expense of righteousness. It brings righteousness to bear on the situation, seeking to eliminate the source of conflict and create right relationships. Feuding parties will know true peace only when they are willing to admit that their bitterness and hatred is wrong and humbly seek God’s grace to make things right.

Some people equate peacemaking with evading issues, but true peace can be very confrontive. In Matthew 10:34 Jesus says, “Do not think that I came to bring peace on the earth; I did not come to bring peace, but a sword.” That may seem to contradict Matthew 5:9, but it doesn’t: Jesus knew that sinful people have to be confronted with the truth before they can experience peace. That can be a painful and difficult process because people usually have a hostile reaction to the gospel before they finally embrace it. Even believers will sometimes react negatively when confronted with God’s truth.

Being a biblical peacemaker has its price. You can expect to upset unbelievers who openly oppose God’s Word as well as believers who compromise its truth for the sake of maintaining “peace” among people of differing doctrinal persuasions. Some will call you narrow-minded and divisive for dealing with controversial issues. Some will misunderstand your motives or even attack you personally. But that’s been the path of every true peacemaker— including our Lord Himself. Take heart and be faithful. Your efforts to bring peace show that you are a child of God.

Today instead of my writing a devotional I thought I would share this one from the teaching of John MacArthur.  Drawing Near was published back in the 1990s and is definitely a great read. 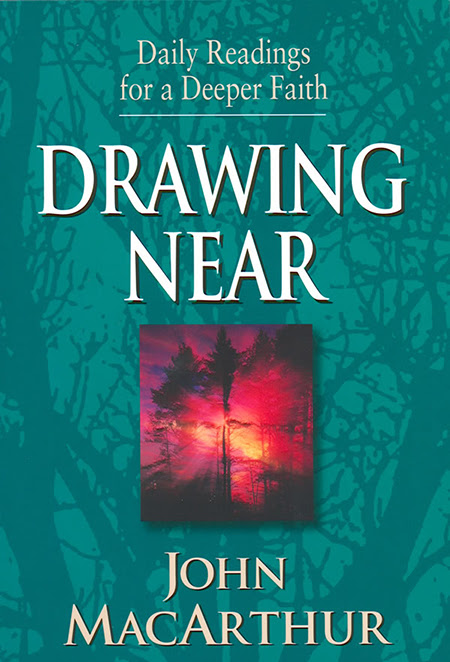 “I gave my attention to the Lord God to seek Him by prayer and supplications, with fasting, sackcloth, and ashes” (Dan. 9:3).

People view prayer differently. For some it is a last resort after all human options have been exhausted: “All I can do now is pray for you!” Others liken it to a spiritual spare tire—something used only in the event of an emergency. Many who should thrive on prayer have been lulled into complacency by an affluent and godless society.

Daniel, however, saw prayer as an opportunity to express the passion and fervency of his heart to the God he loved and served. In Daniel 9:3 he says, “I gave my attention to the Lord God to seek Him.” That implies he set apart a specific time to devote to thoughtful, earnest, and fervent prayer. That is further supported by the way he prepared himself through fasting and donning sackcloth and ashes—symbols of humility and deep contrition over sin.

It might seem unusual for a man of Daniel’s spiritual stature to be overwhelmed by his sense of sin, but the closer one draws to God, the more aware he is of his sinfulness. We see that in Paul, who called himself the foremost of all sinners (1 Tim. 1:15). That might seem like a ridiculous statement to us but Paul saw sin for what it was. So did Daniel.

The title “Lord God” in verse 3 emphasizes God’s sovereign rule over all things. Daniel knew that God had permitted the Babylonian Captivity and that He alone could deliver His people from it. Consequently, Daniel gave the Lord his undivided attention as he prayed and sought mercy for himself and his people.

Daniel’s fervency is a rebuke to much of the flippancy we hear in prayer today. It was profound because it was generated by God’s Word and grounded in His will.

James 5:16 says, “The effectual, fervent prayer of a righteous man availeth much” (KJV). Be like Daniel—a righteous person who prays fervently with great effect.

From Drawing Near by John MacArthur Copyright © 1993. Used by permission of Crossway Books, a division of Good News Publishers, Wheaton, IL 60187, www.crossway.com.

Here is a 7 part series from John MacArthur and Grace to You Ministries that I hope will greatly bless you in these troubling times.

In this portion of scripture, Paul is describing the Man of Lawlessness and the coming “Day of the Lord.”

Our text in the picture above combined makes a clear and convincing argument that God is not sitting on the sidelines while the world is running amuck in chaos. Despite what the naysayers and poorly read theologians think, God and God alone restrains evil.

Today I offer an article/sermon from John Macarthur and Grace to You ministries on the subject. May it bless you greatly.

“Why Does Evil Dominate the World?”

This World is not our Home Series

The Hopelessness of Hope and Change

When Eternity Is More Important

In the World, But Not of It Series

The Friction of Faith

The Campaign of Persecution

The Gospel in a Hostile World

John MacArthur on Loving One Another in the Midst of Persecution

The Pathology of a Doomed Culture

The Futility of Political Change

How to Live in a Pagan Culture

This World Is Not Our Home

The Impotence of the False Church

Even with  COVID,  Political and Financial uncertainties, we all have much to be grateful for this year.  Maybe, just maybe if we spent more time thinking on that instead of our woes we would be in a better place?

From all of us at FSM and FSMWO Happy Thanksgiving.

Remembering All His Benefits

This message was originally preached on September 30, 2018.

It was 1519 in Leipzig, Germany, two centuries before Johann Sebastian Bach came to that city, became the music director in the church there, and wrote new music for every Sunday – a body of work which all of us have come to know and love. But about two centuries before Bach in Leipzig, a powerful force had been unleashed in Germany and all across Europe in the form of Martin Luther. Martin Luther was a Catholic monk, a very powerful personality, a very powerful figure and very capable teacher. He had posted his 95 Theses on the door of the church in Wittenberg, Germany – 95 theses, 95 issues that he felt needed to be addressed and corrected in the Roman Catholic Church…

Source: Remembering All His Benefits

This 3 part series, first published in January of 2017, answers many of the common questions—asked today by believers and unbelievers alike—about why evil flourishes in this world while God remains sovereign over it. -ed.

The Problem of Evil

The Truth About Evil

For His Glory and Our Good

We all know God, or better put, the bible makes it abundantly clear  is that God is LOVE. Yet just as any parent becomes angry with their children’s constant misbehaving so too a Holy God does with His rebellious creation. Yet far to many if not most “preachers” avoid even mentioning God’s wrath.

I am here to tell you it was both the Love of God and the Wrath of God that finally brought me to true conversion. I cried for the Love of someone who would willingly go to the cross for me; and I cried in fear of my own condemnation if I denied that cross and had to spend eternity in Hell.

I pray they bless you greatly. – Mike

The Inconvenient Truth About God

The Reality of God’s Wrath

The Necessity of God’s Wrath

The Revelation of God’s Wrath

The Uniqueness of God’s Wrath

The Timing of God’s Wrath

The Source of God’s Wrath

The Fullness of God’s Wrath

The Good News About God’s Wrath

The following 3 articles are from G2Y “Loving the Local Church” series; I hope they are a blessing to you.

Grace to You Is Not Your Cyber-Church

Grace to You is a Supplement, Not a Substitute

7 Qualities to Look for in a Church

Plus enjoy this related sermon:

Friday’s Featured Sermon: “Why I Love the Church”

The following 10 articles are from G2Y “Truth About Man” series; I hope they are a blessing to you.

The Arraignment of Mankind

The Indictment of Mankind

Sin’s Corruption of Our Character

Why No Man Seeks After God

Sin’s Corruption of Our Conversation

Sin’s Corruption of Our Conduct

Sin’s Corruption of Our Conversation