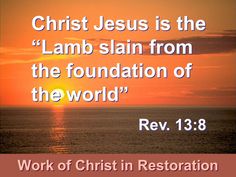 All the inhabitants of the earth will fall down and worship him, everyone whose name has not been written since the foundation of the world in the Book of Life of the Lamb who has been slain [as a willing sacrifice]. Revelation 13:8 (AMP)

Stuck in the middle of a discourse on the beasts that work for “The Antichrist” is this gem of a verse. It assures us that universal homage and worship of the beast will not happen, that a select few, a remnant of believers exist.

They are those whom God chose, His elect whose name was written since the foundation of the world in the Book of Life. This Book of Life is no ordinary book for it was purchased of the Lamb who has been slain, that is with the very Blood of our Lord and Savior Christ Jesus.

Those who are not in the Book, well that has a different outcome. The Lamb’s Book of Life will be opened at the great white throne judgment, and those whose names are not found written ( those who rejected Christ, follow the beast etc.) they will be cast into the lake of fire (Revelation 20:12,15).

“The limitation of the devil’s power and success, and that both as to time and persons. He is limited in point of time; his reign is to continue forty-and-two months (v. 5), suitable to the other prophetical characters of the reign of antichrist. He is also limited as to the persons and people that he shall entirely subject his will and power; it will be only those whose names are not written in the Lamb’s book of life. Christ had a chosen remnant, redeemed by his blood, recorded in his book, sealed by his Spirit; and though the devil and antichrist might overcome their bodily strength, and take away their natural life, they could never conquer their souls, nor prevail with them to forsake their Saviour and revolt to his enemies.”

Is the Holy Spirit pricking your heart? Have you put off repenting of your sins and making Christ Jesus, the Lord and Savior of your Eternal Soul? We know not the day when He will return and the Book will be open.

But now thus says the LORD, he who created you, O Jacob, he who formed you, O Israel: “Fear not, for I have redeemed you; I have called you by name, you are mine.
Isaiah 43:1 (ESV)

While many focus on the “fear not” aspect of this verse I think the key is the last part I have called you by name, you are mine. Yes in context this verse is speaking to Israel (we were obviously not around) but taking the “Whole Counsel of God” come to understand it is applicable to us today.

With that in mind lets take another look; the obvious Fear not, why because we (God’s chosen people, Jew and Gentile who from before the foundation of the world were laid Eph 1:4)  have been redeemed. Then things get real personal God says I have called you and not just any call but personally by name. Why does God do this and not just send a messenger after all He is pretty busy one would think running the universe; because you are mine (we are His).

Maybe it is just me, but that brings me comfort in knowing my God is a personal God, a God that knows me.  – Mike

THY NAME: MY NAME

Great stress is laid on names in Scripture. These two parallel and antithetic clauses bring out striking complementary relations between God and the collective Israel. But they are as applicable to each individual member of the true Israel of God.

I. What does God’s calling a man by his name imply?

Moses, ‘I know thee by name, and thou hast found grace in my sight.’

3. Designation and adaptation to work.

II. What does God’s calling a man by His name imply?

1. God’s possession of him. That possession by God involves God’s protection and man’s safety. He does not hold His property slackly. ‘None shall pluck them out of My Father’s hand.’

2. Kindred. The man bears the family name. He is adopted into the household. The sonship of the receiver of the new name is dimly shadowed.

The Biblical meaning of ‘name’ is ‘character manifested.’

We must bring into connection with the texts the prominence given in the Apocalypse to analogous promises.

‘I will write on him the name of My God.’ That means a fuller disclosing of God’s character, and a clear impress of that character on perfected men ‘His name shall be in their foreheads.’

I have called thee by thy name; with an effectual calling, which is of particular persons, and those by name, even the same that are redeemed by Christ; for whom he has redeemed by his precious blood, they are called by the grace of God to special blessings of grace, with a high, holy, and heavenly calling; and have no reason to fear anything, since they are the chosen of God; have a right to all spiritual blessings; all things work together for their good; they shall persevere to the end, and at last be brought to glory, to which they are called:

thou art mine; such as are redeemed by Christ, and called by his grace, they are his Father’s gift, and his own purchase; they voluntarily give up themselves to him, under the influence of his Spirit and grace; they are his by profession and possession; they are his portion, people, sheep, and spouse; and his interest in them, and theirs in him, serve to prevent fear; such need not fear wanting anything, nor any enemy, nor perishing, or miscarrying of heaven and happiness, to which fears they are subject.

Spurgeon writes in regards to this verse:

The apostle uses the perfect tense and says, “Who hath saved us.” Believers in Christ Jesus are saved. They are not looked upon as persons who are in a hopeful state, and may ultimately be saved, but they are already saved. Salvation is not a blessing to be enjoyed upon the dying bed, and to be sung of in a future state above, but a matter to be obtained, received, promised, and enjoyed now. The Christian is perfectly saved in God’s purpose; God has ordained him unto salvation, and that purpose is complete. He is saved also as to the price which has been paid for him: “It is finished” was the cry of the Saviour ere he died. The believer is also perfectly saved in his covenant head, for as he fell in Adam, so he lives in Christ. This complete salvation is accompanied by a holy calling. Those whom the Saviour saved upon the cross are in due time effectually called by the power of God the Holy Spirit unto holiness: they leave their sins; they endeavour to be like Christ; they choose holiness, not out of any compulsion, but from the stress of a new nature, which leads them to rejoice in holiness just as naturally as aforetime they delighted in sin. God neither chose them nor called them because they were holy, but he called them that they might be holy, and holiness is the beauty produced by his workmanship in them. The excellencies which we see in a believer are as much the work of God as the atonement itself. Thus is brought out very sweetly the fulness of the grace of God. Salvation must be of grace, because the Lord is the author of it: and what motive but grace could move him to save the guilty? Salvation must be of grace, because the Lord works in such a manner that our righteousness is for ever excluded. Such is the believer’s privilege—a present salvation; such is the evidence that he is called to it—a holy life. (Morning and Evening)

Our Lord Jesus Christ by whom we have now received the atonement – Romans 5:11

We were reconciled to God through the death of his son – Romans 510 (R.V.)

The blood of Christ is the seal of the testament. – Henry Smith

The enmity between God and us began on our part, the peace which he hath made begins and ends with himself. – John Owen

Foregoing sins cannot be expiated by subsequent duties. Paying of new debts doth not quit the old ones. – Thomas Manton

He brought me up also out of an horrible pit, out of the miry clay, and set my feet upon a rock, and established my goings. – Psalms 40:2

Gina held onto the branch for dear life. The floodwaters swirled around her, pulling at her, threatening to carry her off in the raging torrent. The pouring rain blinded her, and large clumps of mud kept bumping into her. Her arms ached and throbbed. The last of her strength gave out, but as she let the branch slip through her fingers, a strong hand gripped her wrist. Gina felt herself slide up onto the bank of the swollen river, and she spread herself out to feel the firm ground beneath her.

There are days that feel like a struggle for life. How wonderful it would be to have someone come along and lift us up out of the struggle. God can do that. His Spirit renews and strengthens us. Through the loving power of God, we are pulled out of the darkest pit and set upon solid ground.

Prayer:  Lord, hear me as I call out to You. Whether my problems are huge or tiny, I find I need Your help to get me through. Pull me up into Your loving arms, and surround me in Your love. Amen.

Continued at Source: What is a Reformed Baptist?

A few years ago, I took a pastoral position with the goal of shepherding that flock faithfully for at least 25 years. I told them as much after a 98-percent vote that put me in the sacred office. It was a mandate, and I pushed off shore for at least a quarter decade of preaching God’s Word and leading God’s people.

Virtually from day one, the seas of local church ministry grew hurricane-rough.

My goal was not God’s goal….

Continued at Source: When God Lavishes You with Uncomfortable Grace

Everyone reading may not be in a ministry role, but there are life lessons to be learned for all. How do your goals in life stack up to God’s goals for you?  – Mike

Let the wicked forsake his way, and the unrighteous man his thoughts: and let him return unto the LORD, and he will have mercy upon him; and to our God, for he will abundantly pardon. – Isaiah 55:7

Though God promise forgiveness to repenting sinners, yet God promiseth not tomorrow to repent in. – George Swinnock

Upon the two hinges of faith and repentance do all the saving promises of the Bible hang. – George Swinnock.

From The Domain for Truth

Voddie Baucham is the author of “Expository Apologetics: Answering Objections with the Power of the Word.”

He has also gave lectures on Expository Apologetics and his method is driven by Presuppositional (Biblical) Apologetics.  I love how he begins by saying Christian apologetics is not something only for the “elite” Christians.  It is a responsibility of all of us.

Here are the 4 Part Lectures:

If ye endure chastening, God dealeth with you as with sons – Hebrew 12:7

Chastisement, whereof all are partakers – Hebrews 12:8

The Lord uses his flail of tribulation to separate the chaff from the wheat. – john Bunyan

Affliction is a badge of adoption. – Thomas Watson