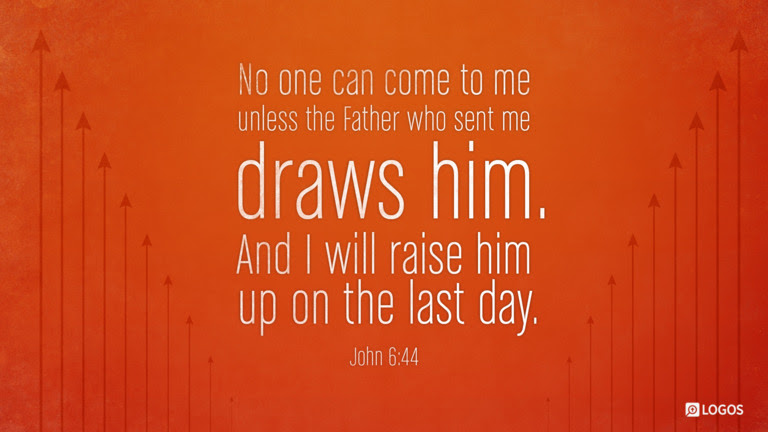 No man can come to me
That is, by faith, as in ( John 6:35 ) ; for otherwise they could corporeally come to him, but not spiritually; because they had neither power nor will of themselves; being dead in trespasses and sins, and impotent to everything that is spiritual: and whilst men are in a state of unregeneracy, blindness, and darkness, they see no need of coming to Christ, nor anything in him worth coming for; they are prejudiced against him, and their hearts are set on other things; and besides, coming to Christ and believing in Christ being the same thing, it is certain faith is not of a man’s self, it is the gift of God, and the operation of his Spirit; and therefore efficacious grace must be exerted to enable a soul to come to Christ; which is expressed in the following words,

except the Father which hath sent me, draw him:
which is not to be understood of moral persuasion, or a being persuaded and prevailed upon to come to Christ by the consideration of the mighty works which God had done to justify that he was the true Messiah, but of the internal and powerful influence of the grace of God; for this act of drawing is something distinct from, and superior to, both doctrine and miracles. The Capernaites had heard the doctrine of Christ, which was taught with authority, and had seen his miracles, which were full proofs of his being the Messiah, and yet believed not, but murmured at his person and parentage. This gave occasion to Christ to observe to them, that something more than these was necessary to their coming to him, or savingly believing in him; even the powerful and efficacious grace of the Father in drawing: and if it be considered what men in conversion are drawn off “from” and “to”, from their beloved lusts and darling righteousness; to look unto, and rely upon Christ alone for salvation; from that which was before so very agreeable, to that which, previous to this work, was so very disagreeable; to what else can this be ascribed, but to unfrustrable and insuperable grace? but though this act of drawing is an act of power, yet not of force; God in drawing of unwilling, makes willing in the day of his power: he enlightens the understanding, bends the will, gives an heart of flesh, sweetly allures by the power of his grace, and engages the soul to come to Christ, and give up itself to him; he draws with the bands of love. Drawing, though it supposes power and influence, yet not always coaction and force: music draws the ear, love the heart, and pleasure the mind. “Trahit sua quemque voluptas”, says the poet. The Jews have a saying F20, that the proselytes, in the days of the Messiah, shall be all of them, (Myrwrg) (Myrg) , “proselytes drawn”: that is, such as shall freely and voluntarily become proselytes, as those who are drawn by the Father are.