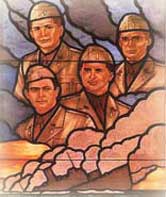 Captain Hans J. Danielsen of the Dorchester was uneasy. The coast guard had warned him that a U-boat was prowling the shipping lane off the coast of Newfoundland. As icy night fell, he ordered the troops he was ferrying to turn in with their life vests on in case the ship was torpedoed.

Many of the 902 men aboard the ship ignored the order. The hold was hot and the life jackets were too bulky to sleep in. Their disobedience cost many of them their lives. Four who obeyed the captain’s command were the ship’s chaplains.

Lt. George L. Fox, a Methodist; Lt. Alexander D. Goode, a Jew; Lt. John P. Washington, a Roman Catholic; and Lt. Clark V. Poling, Dutch Reformed, had befriended the homesick and seasick men of the troopship. Now they were to be put to a severe test.

At 12:55 a.m. on this day, February 3, 1943, the German U-boat launched a torpedo at the Dorchester. The bomb hit with deadly accuracy well below the water line. Many men were killed outright by the explosion. Others were flung wounded and screaming to the floor. Ammonia gas swirled through the hold, strangling others. In the darkness and cold, men struggled to find their way out. Above the din, the chaplains could be heard calming the men, comforting them, urging them to be brave and directing them where to go.

It was evident the ship could not stay afloat. The captain gave the order to abandon ship. Men scrambled for life boats, overloading them. On deck, the chaplains preached courage. They opened a locker with life vests and handed them to the men who needed them. Quickly the supply was exhausted. Each of the four chaplains then peeled off his own jacket and handed it to a man. “It was the finest thing I have seen or hope to see this side of heaven,” said John Ladd, one of the 230 men who survived the attack.

Twenty-seven minutes after the Dorchester was struck, it sank. Survivors said the last thing they saw was the four chaplains linked arm in arm on the deck, praying. Moved by their heroism, Congress afterward marked February 3rd as “Four Chaplains Day” and issued a Special Medal of Heroism to the four, which their families received posthumously.

Christ taught us “greater love has no man than to lay down his life for his friends.” We believe the four chaplains who laid down their lives received greater honor from Christ than any Congress could offer.