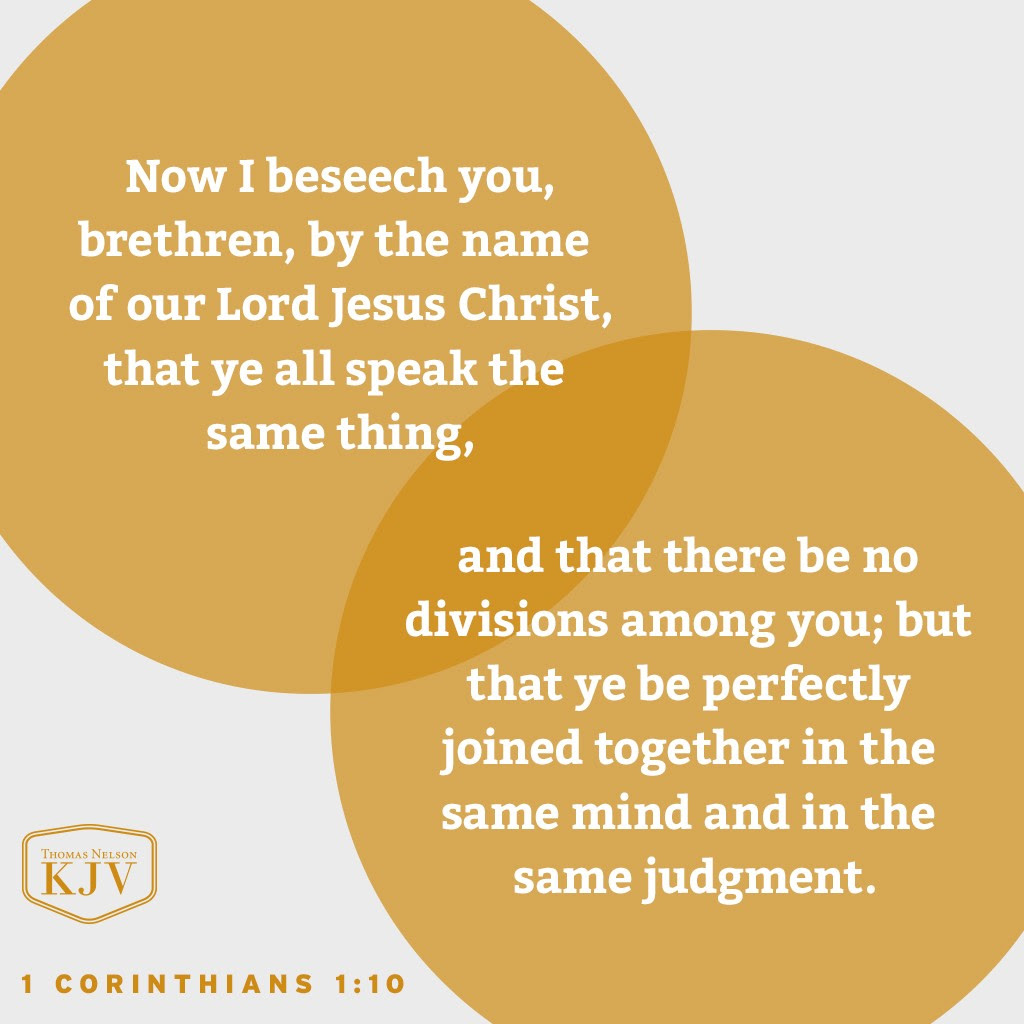 With Protestant Christianity making up the bulk of different denominations, counting 9,000 mainstream and 22,000 independent for a total of 31,000¹ it is no wonder there are disagreements among evangelicals.

Disagreements are one thing, and we should be willing to discuss² by detail examination, biblical doctrine and topics of different denominations. This includes pointing out errors in false (not biblically grounded) teachings.

In yesterday’s devotional, I noted that Paul began this Chapter depending on your version of the Bible with the following:

The CSB and ESV for example divide Chapter 1 as follows:

v.1-3 –    Greeting – From Paul a servant of Christ to the called out ones (Saints) at Corinth

v.4-9 –    Thanksgiving – Paul thanks God for the gifts and knowledge they have of Christ.

But then he cautions them with out text.

Now I beseech you,  Paul is communication this with prayer and supplication. This is not a passing comment like “hey by the way” this is written with a real sense of urgency and almost begging or more modern twisting someones arm.

brethren, It is not done to be mean, it is not done to be boastful, it is done with brotherly love, Paul called then brethren that is fellow saints, God’s children true believers in Christ. This leaves little doubt Paul was assured this was a church full of Christians.

by the name of our Lord Jesus Christ, for the 10th time in ten verses (depending on your version) Paul invokes Christ name. He is reminding the church at Corinth that they are first and foremost grounded in Christ. In v.9  …ye were called unto the fellowship of his Son Jesus Christ our Lord. Not only as individuals but as a whole body of believers.

that ye all speak the same thing, The church and it’s body MUST be on the same page in order for it to survive. Paul reminds them of this. It is one thing to have differing denominations in the U.S. or around the World but impossible to have in your local church.

and that there be no divisions among you; That is a hefty order and command to follow. ZERO Tolerance is to be allowed for divisions in the local church. Far to many churches today fail at this, they do not practice or teach church discipline.

but that ye be perfectly joined together Why so critical, the church is the Bride of Christ as we know all to well, with marriages failing regularly, decisiveness or divisions in a marriage or in a local church just do not work. The almost always end up in a split.

in the same mind and in the same judgment. Disagreement does not have to mean division, but in the end the body as a whole must be (AMP) “…perfectly united in your way of thinking and in your judgment [about matters of the faith].”

We can be in disagreement about the smaller theological issues and still be unified under the banner of Christ.

I hate using myself as an example but it is all I got at the moment so here goes. I am an Associate Member of the Reformed Baptist Network (RBNet), and serve on their Missions Committee as an advisor. At the same time I am a member of Mission M25 Ministries, serving as Chaplain/Medic on the Run for the Wall and am involved in other aspects of the organization. Their parent church is the International Pentecostal Holiness Church (IPHC).

Doctrinally speaking our two denominations are VERY different. Accationally we have some lively discussions (I am one of only 2 or 3 members not associated with IPHC). Yet the brothers and sisters I’ve worked with have a common united front when it comes to serving God in our fields. Whether it’s serving Veterans, campaigning against Abortion, helping Native Americans, standing up for Israel or collecting Diapers for a women’s home, we put away all the minutia, and get down to the business of being joined together in the fellowship of Christ for the Glory of God and the betterment of His Kingdom.

That is what Paul is calling all “TRUE CHRISTIANS” to do. If your church is not unified, first look inward are you the problem? Seek wise counsel of elders. If necessary pray God lead you to a new church.

² Webster’s Dictionary 1913;  “4. To examine in detail or by disputation; to reason upon by presenting favorable and adverse considerations; to debate; to sift; to investigate; to ventilate.”