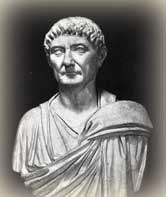 Who was Emperor Diocletian?

Diocletian, born Diocles, was a Roman emperor from 284 to 305. Born to a family of low status in Dalmatia, Diocletian rose through the ranks of the military to become Roman cavalry commander to Emperor Carus. After the deaths of Carus and his son Numerian on campaign in Persia, Diocletian was proclaimed emperor. The title was also claimed by Carus’ other surviving son, Carinus, but Diocletian defeated him in the Battle of the Margus. Diocletian’s reign stabilized the empire and marks the end of the Crisis of the Third Century. He appointed fellow officer Maximian as Augustus, co-emperor, in 286. Diocletian reigned in the Eastern Empire, and Maximian reigned in the Western Empire.

As Barbarians menaced the Roman empire, Emperor Diocletian instituted a number of reforms aimed at saving the sprawling political entity. He reorganized the provinces and made the army more mobile while increasing its size. To battle inflation, he issued a new coinage, established a uniform system of taxation and implemented wage-price controls.

Recognizing that the empire was too large for a single man to rule, he divided it into four administrative units. In doing this he raised to power a man who did Christians much harm. This man, Galerius, instigated by his mother (a die-hard pagan) prodded the Emperor to persecute the Christians. With their new customs, Christians were a threat to imperial unity, he said; and their vast, well-knit organization was the largest non-governmental body ever seen. Surely they could not be trusted: their loyalty was to King Jesus rather than to Caesar. Diocletian, who for eighteen years had never lifted a finger against the faith, followed this wicked advice. The crackdown began on this day, February 23, 303.

The persecutors dragged off church leaders and tortured them to death, employing the rack, the scourge, slow fires, crucifixion, and many other barbarities against them. They burned Christian books and scriptures. Many Christians died deaths of great courage. Theodotus, for example, after terrible tortures said as he was being led back to prison, “It is but just that Christians should suffer for Him who suffered for us all.”

Timothy, a deacon in Mauritania, allowed his eyes to be put out with red-hot irons rather than reveal the hiding place of scriptures. His wife of just three weeks was then brought in and she attempted to persuade him to recant for love of her. He refused. Growing stouthearted, she joined him. After horrendous torture, both were crucified.

In the end, it was the church which won the showdown. All the powers of Rome could not crush its allegiance to Christ. Even Galerius eventually left off the persecution. In 311, the dying emperor issued an edict of toleration. Christians had outlasted the might of the empire. Their resistance to arbitrary power was instrumental in winning the right to follow their Christian faith.