Cause for Waldensian Rejoicing 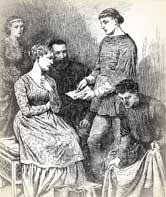 In the evening of February 16th each year, jubilant Italians light bonfires on mountainsides in northern Italy. These are a harbinger of joyous worship services and festivities which fill the following day. The Waldenses have reason to be glad. This day, February 17th, marks the anniversary of the day in 1858 when they finally received a guarantee of civil and religious rights.

Relief had been long in coming. The Waldensian saga began in 1176. A rich merchant, Peter Waldo, heard the words of Christ to the rich young ruler, “If you would be perfect, go, sell what you posses and give to the poor and you will have treasure in heaven; and come, follow me.” Waldo determined to do just that. He provided for his wife, placed his daughters in a nunnery, sold his property and distributed it among the poor.

His first effort was to hire two priests to translate parts of the scriptures into French. Memorizing large portions of this, he began to preach among the people, urging them to imitate Christ’s voluntary poverty. As quickly as he made followers he sent them out by twos with the scriptures and his message of poverty. Disgusted with voluptuous Rome, the Waldensians denounced virtually all Catholic feasts as man made. They rejected the Catholic sacraments except absolution, confession and Eucharist. Like the Quakers of later years they refused to take oaths.

Altars, church buildings, holy water, indulgences and all the paraphanelia and trappings of the established church they renounced. They denied purgatory. The local archbishop, stung by the implied rebuke, excommunicated Waldo. Waldo appealed to Pope Alexander III. Alexander was sympathetic and said Waldensians could preach with the permission of local bishops. To Waldo’s regret, such permission was not forthcoming.

With or without permission Waldo and his followers continued to preach, converting souls over a wide area. Waldensianism became one of the most widespread non-conformist group of the Middle Ages. Its adherents were excommunicated and butchered. For 682 years they fled across Europe or hid in caves, persecuted, hunted, and exterminated like vermin. With the coming of the Reformation, many joined the Protestants. Survivors gathered in 1561 and pledged themselves to adhere to the scriptures. Eventually they were reduced by persecution to only a few thousand individuals. Allowed refuge in Switzerland, they pined for their homeland and in 1689 made a “glorious return.”

Not until the Italian revolutions of the mid-nineteenth century was the remnant, now dwelling in alpine valleys of the north of Italy, guaranteed common rights. After centuries of savage persecution, it is little wonder that the Waldensians celebrate their relief with bonfires, services and festivities.

From the Beginning »
« New partnerships