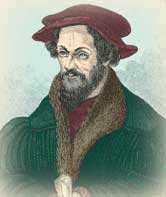 This is a red letter day in the history of the Reformation. On this day, February 16, 1497 was born a man of peace into an age of conflict, a reasoner into a world of passion. His birth name was Philip Schwarzerd, “Black earth,” which in Latin is “Melanchthon.”

At ten Philip was orphaned. His grandmother took him in. Melanchthon proved an apt scholar, entering the University of Heidelberg at twelve. In two years he graduated with his bachelors degree. He proceeded to tutor while adding to his store of Greek. Soon afterward he entered Tübingen where he received his masters degree. When he graduated, the twenty-one-year old was awarded a position as Professor of Greek at Wittenberg through the influence of his grand uncle, the famed humanist, Reuchlin. After a cool reception, he impressed Luther and the schoolmen with his inaugural speech in which he called for thorough-going reform of the curriculum. Martin Luther had already posted his 95 theses and was stirring the Christian world.

Melanchthon himself was ripe for reform. Having read Erasmus’ Greek Testament, he, like Luther, was convinced salvation must be by faith rather than by works. He united his talent with Luther’s and, in public dispute, bested Luther’s chief opponent, Johann von Eck. Not content to argue orally, Melanchthon defended his position in writing. With careful reasoning he clarified what the Reformation was all about. Others characterized him as the brains behind it.

Because he was a peaceable man, Melanchthon was the natural person for Luther to ask to prepare a statement to deliver to Emperor Charles V who had summoned the German Diet to settle the nation’s religious differences. Melanchthon’s statement was conciliatory. The first twenty-one points emphasized doctrines on which both sides were largely agreed. In the last seven points he addressed those issues on which he felt Catholics had varied from scriptural authority. The key point of the document was that justification of the soul is by faith alone. It became known as the Augsburg Confession and remains the basic statement of Lutheran doctrine. Rome rejected it.

Melanchthon continued to strive for a formulation which would be acceptable to all sides. He did not want the church divided. But his voice of reason was lost in the roar of the day. Because he would not accept Luther’s vehement position on the Sacrament, the great reformer turned on his quiet friend and blasted him mercilessly. On his death bed Luther felt remorse for this. “Dear Philip, I confess to have gone too far in the affair of the Sacrament.”

Melanchthon lived several years after Luther died, steadily teaching at Wittenberg, but ignored by the radicals who too often headed the Protestant movement. In the end his quiet soul longed for death as a way to escape the “frenzy of theologians.” Nonetheless his Augsburg Confession remained one of the few grounds mutually respected by the quarreling reformers. However, he himself was vilified as a compromiser and neglected for 200 years after his death.

Train passing thru a building »
« Depths of Love, Heights of Joy