Down with King James II! 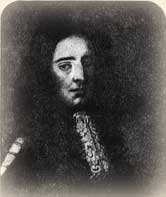 The year 1689 witnessed an extraordinary event. William III of Orange came to the throne of England in a bloodless revolution. It was not that England had no king. James II sat in Whitehall and did not hesitate to exert his royal prerogative as he saw fit. The problem was the Roman Catholic king used his powers to browbeat Anglicans and raise “papists” to positions of authority.

James might have kept his throne if he’d been more merciful to rebels early in his reign and more accommodating of the interests of his people. Protestant forms were firmly entrenched and the English had no desire to return to the Catholicism whose hierarchy seemed contradictory to the democratic ideals which were coming into vogue. For most Englishman a return to Catholicism seemed a turn from a gospel of faith to a life of works; from a liberating parliamentary system back to a dictatorial monarchy. Liberties were still scarce enough that people prized them; and not least of those was the principle that the king could not override a law of Parliament.

James had a knack for rousing suspicion. He raised a personal army of 13,000 men, a threat to Parliament; and he accepted subsidies from Louis XIV, the Catholic King of France; naturally the Anglican church viewed this as a threat. Cruel, dishonest Jeffries became the king’s leading judge and James made him a lord. James forbade clergymen to preach on certain political topics and arrested John Sharp when he preached on the motives of converts.

The Universities of Cambridge and Oxford were training grounds for Anglican priests. James tried to force Cambridge to accept Catholic leadership. The schoolmen refused. James was furious. He then tried to usurp Magdalen College’s long-standing right to elect its own president and compel them to accept a Catholic as head of the school. Again the schoolmen resisted him. The situation worsened when Anglican churchmen refused to read James’ Declaration of Indulgence from their pulpits. The Declaration was an excellent idea, granting religious liberty. However it was seen as an attempt to defy Parliament through whom such authorization ought to come. James brought four Anglicans to trial. The jury acquitted them.

What finally brought James down was the birth of his son. Rather than face the prospect of a Catholic heir, the English decided to replace James with a Protestant. They contacted his Son-in-law, William III.

On this day, February 13 1689, Parliament granted the throne to William with certain religious and civil conditions: “Whereas the late King James II… did endeavor to subvert and extirpate the Protestant religion, and the laws and liberties of this kingdom…” they wrote, “…[we] do resolve that William and Mary, Prince and Princess of Orange, be and be declared King and Queen of England…” The declaration further barred anyone of the Roman Catholic faith from possessing the English throne.