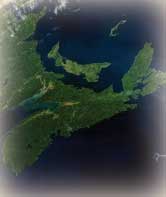 I  do not wonder that it is so hard for you to keep up an external appearance of Christianity. It is a hard task without any divine love or heavenly life to produce it. Why try any longer to cover your nakedness with fig leaves…” Henry Alline preached with this kind of fervor.

After years of desperate search, years in which he trembled that he would be forever damned, Henry discovered the love of Christ in 1775. He had cried out for mercy, saying, “O Lord Jesus Christ, you can this night, if you please, with one drop of your blood, atone for my sins and appease the wrath of an angry God.” He described the transformation as instantaneous. Then he reckoned that “the anger wrath and vengeance which I saw, was wholly in myself, by the hellish nature that I was possessed of.”

He was twenty-seven. Immediately, he began telling others about Christ. He felt a call to preach, but hesitated to do so, because he had little education. Born in Rhode Island, he had migrated to Nova Scotia with his parents at twelve years of age. After his conversion, his ministry now took him across Nova Scotia and back into New England. Everywhere he went, he spoke of each person’s need for a heart relationship with the resurrected Christ. The impact of his words and life were so great that he became known as “the Whitefield of Nova Scotia.” (George Whitefield was a preacher who led revival in England and the American colonies.)

Henry wrote hymns (more than 500 of them) some of which expressed his new-found joy.

He pluck’d me from the jaws of hell
With his almighty arm of pow’r,
And O! no mortal tongue can tell
The change of that immortal hour!

He also kept a journal which reported his intense religious experiences. Throughout his short life, he swung between moods of deep depression and heady joy. Consequently, his writings seem overly emotional. He taught some odd doctrines, too, about how souls are created and how the unseen world relates to this. But the heart of his Gospel was sound and the spiritual awakening that he aroused was real.

The preaching of Henry and other “New Light” ministers produced communities of true worshippers. They became concerned for one another’s social needs. The result was that spiritual revival was followed by community improvement.

Henry contracted tuberculosis. Despite his illness, he worked unceasingly to spread the gospel. His efforts exhausted him.

In 1784, he visited New England. On this day, February 2, 1784, while at the home of the Reverend David McClure in North Hampton, New Hampshire, he died. He was not quite thirty-six years old and had preached for just eight years.