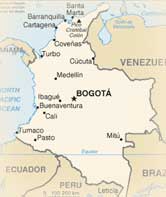 “We had no idea we were living in a dangerous area,” said Tania Rich. “[W]e were just a normal couple doing what we thought we should with our lives.” That happened to be work with New Tribes Mission in the Kuna tribe on the Panama-Colombia border.

On this day, January 31, 1993, armed guerillas from the Revolutionary Armed Forces of Colombia, known as FARC, entered the village of Púcuro, Panama. There they seized Tania’s husband and two other missionaries, and vanished with them into the night. Shortly afterward, Nancy Mankins, Tania Rich, and Patti Tenenoff learned that FARC had radioed the mission. The guerillas were demanding millions of dollars for the release of the three husbands, Dave Mankins, Mark Rich, and Rick Tenenoff.

Like many missions, New Tribes has a policy not to pay ransom for hostages. With over three thousand missionaries serving world wide, many in politically troubled areas, New Tribes fears that paying ransom will encourage kidnappings, putting all missionaries at increased risk. New Tribes radioed the guerillas that there was no money to meet their demands. The two sides continued to talk by radio for about a year. In January 1994, FARC broke off contact.

The long wait continued. For the families, the silence could mean anything. Were the men ill or well, alive or dead? Probably they were being moved from hideout to hideout–that had been the experience of other hostages. It was likely they were in danger from Colombia military gunships battling FARC, from jungle creatures, and from torrential rains. For the wives and children of the captured men, concern for their loved ones was only one throb in the persistent ache of loss.

Nancy’s children, Chad and Sarah, married. “Even up to the day of each wedding, we were hoping that he would get back to give his blessing,” she said.

According to Patti, her two youngest children can scarcely remember their father at all. “Each of the kids have a picture of them with Daddy. At bedtime the kids ask me to tell them something about Daddy. My son has said that he would go and stay with the guerillas just to be with Daddy.”

Jessica Rich had a favorite teddy bear named Cubby. “You know Mommy,” she told Tania, “I would give away all my toys, even Cubby, if it would bring Daddy back.”

New Tribes continued to negotiate quietly, hoping to bring about a happy ending. In 1997 there was a brief surge of hope when the Costa Rican government reported that a FARC official had confirmed that the hostages were alive and well. Other contacts corroborated this report, but then the silence returned.

Five years after the men were captured, their whereabouts and well-being was as uncertain as ever and there was no prospect of their release. James Rubin for the State Department of the United States said officials had “engaged the Colombian government at all levels to insist that they do all they can to determine the welfare and whereabouts of our American citizens.” New Tribes issued news releases and a bulletin calling for the captives’ release, for action by humanitarian organizations, and for prayer by Christians. Yet the ordeal dragged on. Not until 2001 did New Tribes receive eyewitness confirmation of the death of the men.