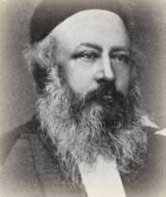 One of the little known stories of 19th century missions is that of Francis Thomas McDougall. It is the story of a forceful man. Francis was born in England but spent much of his childhood and youth overseas with his military father. Growing up, Francis became interested in medicine and enrolled in the University of Malta. Later he transferred to King’s College, London, and took his medical degree at London University, becoming a member of the Royal College of Surgeons in 1839. Continuing his education he entered Oxford. While there, he rowed on the university’s winning team of eight. His physical prowess and medical training would prove valuable in his later career.

He did not at first employ his medical degree but helped supervise an ironworks. He married the daughter of one of the men connected with the firm. When the works failed, he decided to take holy orders, a thing he had long contemplated. He was ordained in 1845. He was then 28 years old.

For two years he held curacies in England, and for a short time worked at the British Museum. When a chance opened for him to go to Borneo (now called Kalimantan) as a missionary, he turned it down, but later repented the decision and in December 1847 sailed for the mission field.

Francis was a pioneer in medical missions. His supervisors actually thought he was stepping out of line when he began to tend the sick. He had to convince them he was doing only what was right.

He had little success among the Muslim Malays who, coming from the peninsula, were overlords to much of Borneo. He did better among the Chinese traders who had settled Borneo, but best among the indigenous Dyaks. His work brought many of them to believe in Christ.

On this day, October 18, 1855 he was made Bishop of Labuan and Sarawak. Although he was actually bishop of Borneo, the church hesitated to give him that title because England did not rule the island. Francis and his wife, Harriette suffered much in the years that followed. Illness racked their bodies. Their children died. A riot by the Chinese wiped out much of their work. In spite of this formidable opposition. Francis and Harriette persevered, unconquerable even when other missionaries fled. Harriette wrote delightful letters and sketches of their life.

Francis took the blows of life on the chin, but not without resistance. Once a boat on which he and a local bigwig were passengers was attacked by pirates. Every man aboard was ordered to the defense. The bishop fought gallantly with the best of them and helped repel the pirates. His exuberant account of the affair was rebuked at home. A British bishop was not supposed to enjoy a brisk brawl. Broken health forced him to return to England in 1867, twenty years after he first set foot in the East Indies. Among his achievements was a Book of Common Prayer and Catechism in Malay.